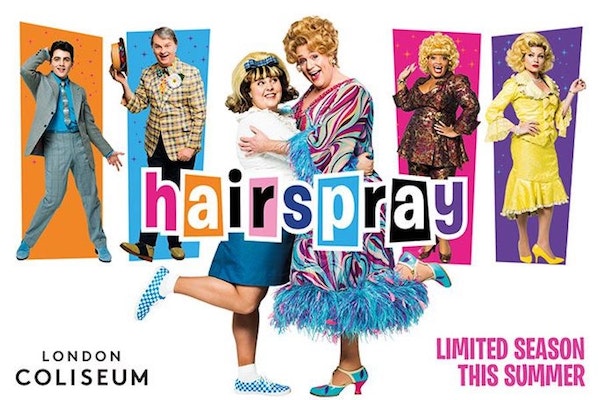 Paul Merton will NOT be performing on Thursday evenings.

Michael Ball will reprise his role as Edna Turnblad as Hairspray is set to return to London for a summer run at the London Coliseum next year.

Ball appeared in the musical when it last ran in London, opening at the Shaftesbury Theatre from October 2007. He has since appeared in Sweeney Todd: Demon Barber of Fleet Street, for which he won an Olivier award, and is set to appear in the all-star concert production of Les Miserables, opening at the Gielgud this summer.

With music by Marc Shaiman and lyrics by Shaiman and Scott Wittman, the musical is set in Baltimore and tells the story of Tracy Turnblad who auditions for a part on her favourite TV show. It features the songs Good Morning Baltimore, I Can Hear Bells, Big, Blonde and Beautiful and You Can’t Stop the Beat.

Directed by Jack O’Brien and with choreography by Jerry Mitchell (Kinky Boots), Hairspray will run at the London Coliseum from 24th April to 29th August 2021.

With a book by Mark O'Donnell and Thomas Meehan, the musical is based on the 1988 film of the same name written and directed by John Waters. It received its Broadway premiere in 2002 and won eight Tony Awards the following year, and added four Olivier awards to its collection after the West End transfer.

Baltimore, 1962. Tracy Turnblad is a big girl with big hair and an even bigger dream: to dance her way onto national TV, and into the heart of teen idol Link Larkin. Tracy’s audition makes her a local star and soon she is using her new-found fame to fight for integration. But can she win equality – and Link’s heart – without denting her ‘do? Featuring the hit songs Welcome To The 60s, You Can’t Stop The Beat, The Nicest Kids in Town and many more. Don’t miss this irresistible feel-good show that is guaranteed to have you dancing the night away. Let your hair down and book now!

Michael Ball is one of Britain's most famous musical performers, having starred in countless Broadway and West End shows. In 1998, he won the Variety Club of Britain's Best Recording Act Award and has a loyal and dedicated fan base. As well as on stage, he performs regularly on television and film and is a committed charity worker. He has a very special place in the hearts of his fans who have supported him for over twenty years.

He has a dry wit and a talent for bizarre but hilarious trains of thought. Best known for his TV appearances as a team captain on the topical news show, 'Have I Got News For You', and as the presenter of 'Room 101'.