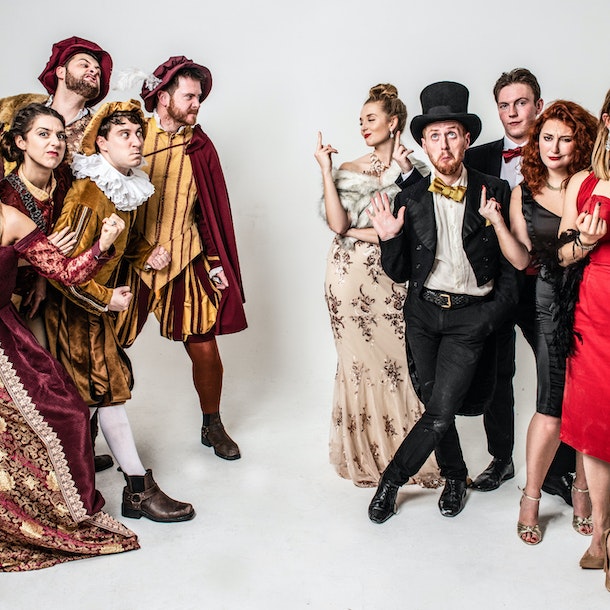 “By the pricking of my thumbs, Something wicked this way comes.”

Sh!t-faced Shakespeare® is back for the 5th year at Leicester Square Theatre and it’s going to be a bloodbath, with their all-new production of Macbeth.

Upon hearing the weird sisters’ prediction, Macbeth and his wily wife take matters into their own hands and burn down everything in their wake. Well, almost. Fair is foul and foul is fair in this tale of prophecy gone slightly off the rails. Perhaps an inebriated actor will help the process along?

Featuring Shakespeare’s most lovable witches, ghostly best friends, hell-hounds, unhinged wives, enough dead kings to give Game of Thrones a run for its money, and lots of plaid, Scotland storms London in 2020.

Settle in for a pint (or two!) and raise a glass with us. Sh!t-faced Shakespeare® is the classic combination of a Tetris-ed together Shakespeare script, a six pack of professional actors and a luge of booze! What could possibly go right?

Warning: Sh!t-faced Shakespeare® is perfect for those wishing to add to their repertoire of colourful language and not for those who blush easily at the mere mention of the “F” word…

This show was rescheduled from 24th June-12th September 2020.

Sh*t-faced Shakespeare® is the deeply highbrow fusion of an entirely serious Shakespeare play with an entirely sh*t-faced cast member. Outrageous raucous and completely unpredictable, the show has been running since 2010 and has already entertained over 200,000 eager theatre goers across the UK and US. Having successfully completed multiple sell-out runs of the Edinburgh and Brighton Fringe festivals, the Magnificent Bastards made their way stateside in 2015 to Boston and have been enjoying a smashingly successful run since. In addition to Boston, Austin, Atlanta, and Minneapolis, all have a crop of Bastards on hand to delight you each weekend. Sh*t-Faced Shakespeare® seeks to introduce a new generation of theatre-goers to the works of the Bard by reviving the raucous, interactive and vibrant nature of Elizabethan theatre with a very modern twist – reminding them as we go to always enjoy Shakespeare responsibly.