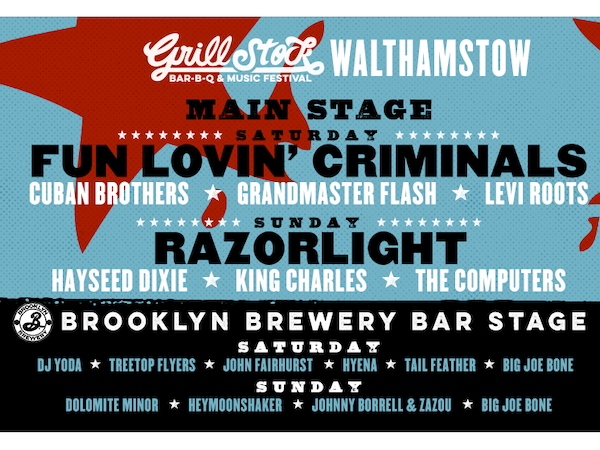 Bringing meat, mayhem and music to the capital, the perfect soundtrack to a Sunday afternoon will be headlined by indie rock band Razorlight, supported by festival favourites and Grillstock veterans Hayseed Dixie. Saturday’s soundtrack in Chestnuts Field, Walthamstow will feature legendary DJ Grandmaster Flash as he plays an eclectic set, followed by the sexy sounds and Latino chest hair of the Cuban Bros and DJ Yoda in the Bar Stage, with more special guests still to be announced.

Festival goers can expect a smouldering hot US style low 'n' slow BBQ competition, chilli-pepper and hot-dog eating competitions, over 40 bands and DJ’s playing across its music stages. The US style ‘low and slow’ BBQ competition puts the teams through their paces as they show off their culinary skills over the smoky coals and battle it out to be crowned King of the Grill. The competition allows festival goers the chance to interact with the teams, taste the food and experience their passion for authentic barbecue. Increasing the heat, US BBQ veteran Dr BBQ aka Ray Lampe will oversee the judging.

Food fans can also check out the Weber BBQ Academy, imported craft beer in a New York Dive Bar, bourbon dens and village of BBQ traders serving up pit-smoked meaty treats and Grillstock’s very own Pale Ale, which was created especially for BBQ.

From the band's eponymous 'redneck hip-hop song', to the chilled vibes of Love Unlimited, this New York trio have been rollin' their own unique blend of rap, blues and rock since 1993. The addition of some tongue-in-cheek gangsta humour from frontman Huey ensures that FLC's live shows are just as memorable as their music.

Duncan Beiny aka DJ Yoda is no ordinary scratch DJ. His seminal 'How To Cut & Paste' series showcased a tongue-in-cheek mixing style that prompted Q Magazine to declare him “one of the ten DJs to see before you die”. Originally a hip hop dj, he has been steadily incorporating a myriad music styles into his shows with a view to create exhilarating musical collages, from reggae to drum'n'bass, kuduro to country music - and often at the same time! - concocting an intoxicating blend with one single aim in mind: to get the party going! Trail-blazing into the world of the audio-visual he has pioneered a new artform using cutting edge technology that he has been instrumental in developing to scratch and mix visuals on top of his DJ sets. Drawing from sources as diverse as classic movies, obscure television shows, or viral youtube clips, you can find him cutting up the Indiana Jones theme tune to full on dubstep, or dicing and splicing the Muppet Theme with M.I.A. in amongst the inimitable audiovisual whirlwind that is DJ Yoda.

'Dolomite Minor are two kids of debatable age from Southampton. They've gorged on the rarities of Kurt Cobain and Led Zeppelin amongst others. Singer Joe Grimshaw is a true dead-eyed soul with a killer voice to boot' (NME).