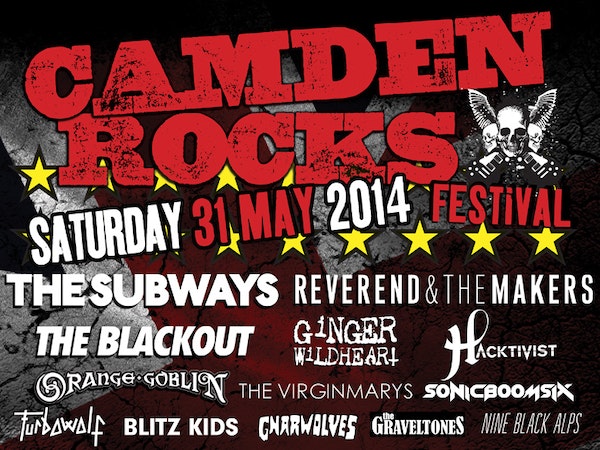 at Be At One, London
Passed

MixHell is a new and exciting collaboration which aims to fuse together the best and most uplifting elements of the rock and electronica scenes to create a 'Rock-tronica' effect.

Having worked with Primal Scream, The Chemical Brothers, Spiritualized and Paul Weller, the band's lead guitarist Barrie Cadogan is often referred to as the greatest guitarist of his generation. With their undiluted rock 'n' roll swagger, Little Barrie are possibly the only guitar-based group in Britain not to look out of place headlining a funk night! The power trio originated in Nottingham but have since relocated to London. Their sound could be described as stripped down RnB / Soul / Funk / Blues / Garage rock jam band.

A Plastic Rose were formed in 2006 from the scattered remains of Sligo band Haiku Thiefs. The observant, passionate songwriting and endearing melodies of the two front men, already familiar to some discerning Sligo music fans, now benefits from the backing and interaction of a full band.

Music elicits physical and psychological reactions. Your body moves, and your mood changes in response to the ebb and flow of a song. It’s one of the few singular forces that can seamlessly speak to both our tangible and intangible nature. Canterbury, UK band Broken Hands stimulate both halves with a two-prong style fueled by half-time gutter groove rock ‘n’ roll and ethereal flights of cerebral sonic exploration. This duality initially powered the group’s 2015 full-length debut, Turbulence. Produced by Tom Dalgety [Royal Blood, Pixies, Ghost], it walked a fine line between arena ambition and alternative adventurousness. Moreover, the record announced the boys—brothers Dale [lead vocals] and Callum Norton [drums, backing vocals], Jamie Darby [lead guitar], Thomas Ford [bass], and David Hardstone [rhythm guitar, keys]—as a critical favorite with acclaim from NME, The Independent, BBC Music Introducing, and more. Simultaneously, they developed a reputation for raucous live shows, performing alongside the likes of The Kills, Catfish and the Bottlemen, The Cult and Deaf Havana in addition to gracing the stage of the world-famous Reading & Leeds festivals. Along the way, they landed a deal with Atlantic Records stateside and plotted their sophomore effort. Just prior to entering the studio, the pace slowed when Dale endured the sort of nightmare most musicians don’t dare dream about: intensive ear surgery that left him unable to sing or play music for nearly two months. “I had to have this dissection to basically open up the pathways,” he explains. “I couldn’t do anything after for what felt like forever. I’m probably hearing music completely different from how I did. The upside was I came into this record with a fresh palette.” Embracing this fresh palette, the band opted to work with producer Julian Emery [Nothing But Thieves, Lower Than Atlantic] on new music with long-term collaborator Dalgety moving to the mixer’s chair. Nodding to American influences as diverse as Nine Inch Nails, Big Brother and The Holding Company, and My Morning Jacket, Broken Hands adopted a “half-time” rhythm. As a result, the guitars, drums, bass, and vocals hit harder as they seesaw back and forth. “For a British rock guitar band, it’s all about fast, four-to-the-floor singles,” says Dale. “We went slower and heavier. We loved doing the slow vibe. It was a big lightbulb moment.” Case in point, hulking distortion and sinewy riffing propel the 2018 single “Split In Two” forward at a confident strut before giving way to Dale’s hypnotic hook. “We literally felt split in two,” says the frontman. “Touring as much as we have, you’re divided from the ones you love and spend the rest of your life. In a psychological sense, you can also feel divided between two things. You’re stuck in a corridor. The idea extends to the sonics. One minute, I want to write a screaming heavy record. In the next, I want to write something tranquil. It’s a push-and-pull.” Another standout “Friends House” tempers moments of introspection with a bombastic sense of dread siphoned through sparse percussion and a paranoid wail. It draws on a moment when Dale found himself threatened at gunpoint in the midst of the band’s first U.S. tour. “It’s quite a dark song,” he admits. “You think you’re happy and you think you’re safe, but actually you couldn’t be any further from safety. When you get very intoxicated, you’re happy and comfortable, but it’s actually the most dangerous position to be in. When we first went to the States, I got held up at a bar at 4AM. I was drunk, British, and not familiar with this sort of situation. That could happen anywhere. It’s the illusion of safety.” In the end, Broken Hands translate duality into definitive anthems. “It’s okay to be divided,” Dale leaves off. “You don’t have to feel like you’ve got to be one thing all of the time physically, psychologically, or musically. Too often in life, people try to tell you to be one thing. We reached a new level by clinging to both sides.”

I Am In Love

The group has been influenced by the music of their heroes Prince, Bowie, Adam Ant, Freddie Mercury and bands like The Cure, Bloc Party, OMD and Foals.

See I Am In Love tour dates

'They're a little bit Libertines, a little bit Ramones - but they're certainly a hundred percent London. With a punk rock chorus that comes out of nowhere, Whack Jack must surely serve as a stomping, unifying crowd-pleaser live. The punk rock chorus comes out of precisely nowhere and is the sort of thing the word 'tasty' was invented for' - Pete Donaldson XFM/Absolute Radio DJ.

Having met whilst huddled in the doorway of a dilapidated Edwardian boudoir in Newcastle, 2008, The Din were born on a bed of the kindred spirits of vagabond misfits. Six musicians united by the love of gypsy jazz, psychedelic pop, blues fueled roots and freshly roasted coffee beans. Since releasing their debut album in November 2010, the band has relocated to Camden Town, London. Living and rehearsing together in a crowded bed-sit, their sound has evolved incorporating travelling-folk, eastern-European and middle-eastern traditional music, whilst retaining the melodic alternative psychedelia from which it was formed.

Hailing from Bournemouth, Voodoo Vegas are a raw and explosive rock band giving us a snapshot of what, will soon be a powerful force in British rock music. They have the sound, the songs, the band, and everything that’s needed to go far in the world of rock.

Hertfordshire alt-rock quintet Chasing Cadence deliver raw and relentless alternative rock infused with electronic samples and high-octane energy. The band landed a deal with TNA Wrestling for the opening credits of worldwide television show TNA Xplosion with their track 'Dear Life', which became the TNA Xplosion Wrestling theme. The band have wrestled their way up the gig ladder and have already played several high profile festivals and support slots.