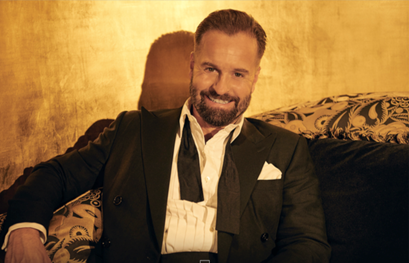 Alfie Boe and his band will open the series of concerts on Friday 3rd September 2021. Ever since he exploded onto the music scene nearly 20 years ago, Alfie Boe, a veteran of the London stage and Broadway, has racked up one extraordinary achievement after another. He has two UK Number 1 albums to his credit and has sold more than one million albums in the UK. Having performed in some of the world's greatest venues, he has the rare ability to bring together all sorts of music lovers.

Not many artists can lay claim to having appeared in the West End theatre, Broadway with lead roles in Les Miserables, La Boheme (which earned him a Tony award) and the spectacular orchestral classic rock album Quadrophenia. He is a singer who transcends categories. "When I look at the crowd at my concerts," he says, "I can see I've got Who fans, musical theatre fans and jazz fans as well."

Most recently having starred as Jean Valjean in the 'All Star' concert of Les Miserables, Alfie will be performing some of his favourite songs and West End hits with special guests and fellow West End and Broadway stars; Louise Dearman and Rachel Tucker who will open the show.

Alfred Giovanni Roncalli Boe was born in Blackpool to opera loving parents, with his Mother from Co. Mayo and his father from Norway. In this short time he has moved from being a Car Mechanic to an award winning Broadway star. His enchanting voice has captured the hearts of audiences and critics on both sides of the Atlantic. Alfie has moved further away from his traditional operatic repertoire on recent recordings and has never sounded so coolly contemporary, applying his extraordinary voice to a soulful set of country and blues, folk and gospel, standards and originals such as, ‘Georgia On My Mind’, ‘You’ve Got A Friend’ and ‘Glory, Glory Hallelujah’. His repertoire draws on the full range of his musical interests, from pop to rock to classical to musical theatre.

After graduating from Laine and receiving their Musical Theatre and Opera Award, Louise joined the touring cast of Joseph And The Amazing Technicolor Dreamcoat as the The Narrator. Soon after, she played Jan in the UK tour of Grease, later returning to the role at the Palace Theatre. Other credits include roles in Guys And Dolls, Jekyll And Hyde, Cats and Evita. She is also a recording artist with a number of acclaimed albums to her name.

Northern Irish singer and actress who competed as one of the finalists in the BBC talent show-themed television series I'd Do Anything in 2008.