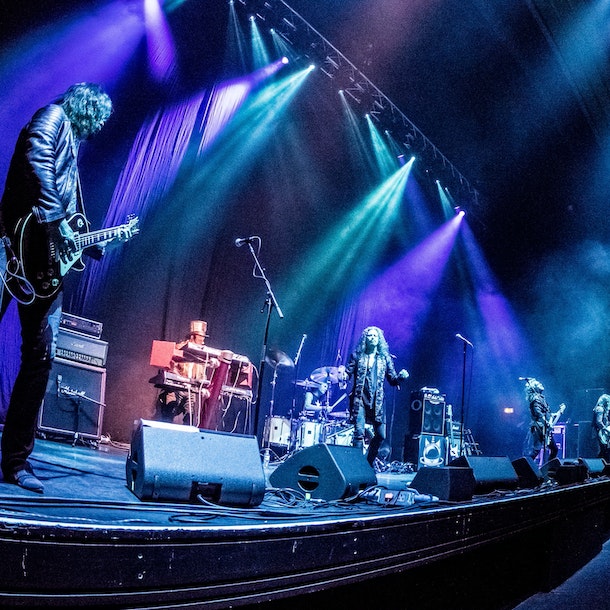 Cats In Space have caused quite a stir since landing in 2015. With their unique sounds they will transport you back to the glory days of 70s Classic Rock. Think loud guitars, walls of soaring multi tracked vocal harmonies, grandiose pianos, and huge singable choruses. It’s purr-fect!

Touring with legendary rock giants Deep Purple, Status Quo & Thunder playing UK arenas, plus Hyde Park with Phil Collins and Blondie, the Cats have gained an ever growing army of faithful fans gaining incredible live reviews along the way. In 2019 they played their biggest headline tour so far, ending with a date at the prestigious London Palladium. All this before heading over to Europe ahead of a huge Christmas campaign.

Four critically acclaimed LPs, which all landed in the UK album charts, an ever growing presence on BBC and regional radio stations nationwide confirms that Cats In Space are fast becoming one of the UKs leading rock bands, but unlike no other.

They are back on tour again with a new album emerging, and one which promises to top the lot.

New classic rock UK band with more hooks than a crane factory! Touring with legendary rock giants Deep Purple, Status Quo & Thunder playing multiple UK arenas, as well as Hyde Park with Phil Collins and Blondie, the Cats have accumulated an ever growing army of faithful fans, gaining exceptional live reviews along the way. From humble beginnings to Hammersmith Odeon, The London Palladium and the London O2 Arena shows the extent of this orbital journey for these cool Cats so far... The band is formed entirely of musicians with a wealth of experience - both writers and performers, with impressive musical CVs including The Sweet, T’Pau, Ian Gillan, Asia, Robin Trower Band, 10cc, Arena, Moritz, Airrace & Statetrooper, to name but a few. Currently on their outrageous fourth studio album ‘ATLANTIS’ with more new live dates added to coincide with its release... "Travel back to the heady days of the 1970s when bands like Queen, 10cc, ELO, The Who & Cheap Trick ruled the analogue airwaves and you'll be firmly in the Cats' orbit... " Classic Rock