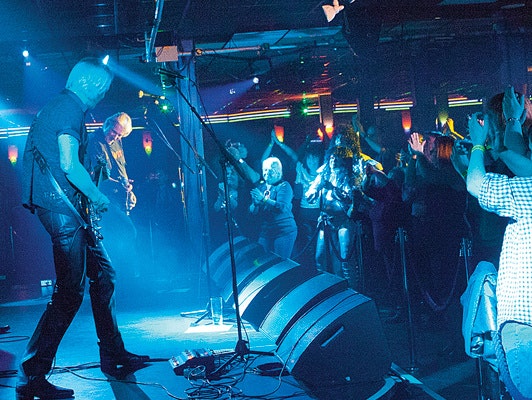 Brand New for 2020 is the Totally Christmas Party! Packed full of top tribute acts that will get you in the Christmas spirit.

The hottest tribute to ABBA! This Kent based authentic ABBA tribute band travel all over the country and abroad performing ABBA's greatest hits. Recreating the legend of ABBA vocally and visually, the band is the closest to the real ABBA you will ever hear or see! A show suitable for all ages, not to missed.

A tribute to The Beatles.

Award winning tribute to The Electric Light Orchestra. The ELO Encounter not only flawlessly recreates the wonderful music of ELO, it’s a spectacular live show from start to finish.

The Overtures are widely regarded as among the finest exponents of '60s pop music in the world. 'Awesome' is how Sir Elton John describes them and 'probably the best of their kind ('60s band) in the world'.

The Original Jukebox Heroes - Rocking Back The Seventies

The Original Jukebox Heroes are a live action, select-a-disc spectacular that will catapult you back to the days of glitter, glam and platform boots! Formed in 2005, The group consists of original superstars and long-serving members from well known Glam Rock bands including; Jeff Brown (Ex-Sweet), Steve Whalley (Ex-Slade), Phil Hendriks (Les McKeown's Bay City Rollers), Philip Wright (Paper Lace), Pete Phipps (The Glitter Band) and Dave Major (Mickey Finn's T-Rex). The band delivers a show packed with an energetic cavalcade of toe-tapping Glam Rock classics and a spectacular visual delight that leaves the audience screaming for more! The Original Jukebox Heroes have been very successful in Russia and across Europe regularly appearing at outdoor festivals and are always in demand! The band have recently completed a tour of UK venues as well as wowing hardcore Glam Rock holidaymakers at seventies themed weekender events. Preparations are now underway for their 2017 tour. The Original Jukebox Heroes set comprises of songs from each respective band member’s career, namely, Fox on the run, Cum on feel the noize, Bye bye baby, Billy don’t be a hero, Angel face, Hot love, Blockbuster, My oh my, The night Chicago died, Love is like oxygen and many, many more chart-busting hits from the Glam Rock Seventies.

The Definitive Rat Pack are best known as the original cast members of The Rat Pack – Live from Las Vegas who have now created their own and more personal show. They are undoubtedly some of the world’s finest interpreters of Frank Sinatra, Dean Martin and Sammy Davis Jr. available. Other acts and shows have followed in their wake, often riding off their success, but simply lack the one necessary ingredient to make it special; which is the ‘tour de force’ that are Stephen Triffitt, Mark Adams and George Daniel Long.

A UB40 tribute band. Each member of the band have studied the playing techniques, style and sounds of the members of UB40 who they are representing so that the real UB40 sound is present in their performance. Members of the band have performed with Brian Travers and Laurence Parry of UB40 plus Steel Pulse, and The Specials. A line-up of hand picked world class musicians, the band are set to be one of the biggest and best tribute bands in Europe.