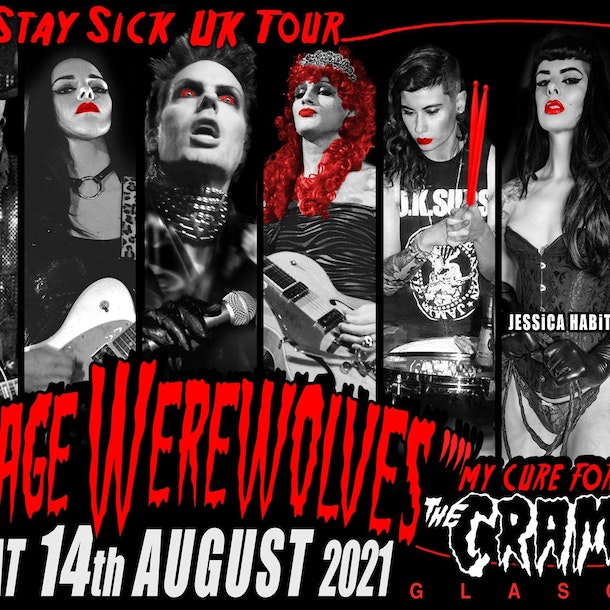 PLEASE NOTE FULL EVENING, early start. STAGE TIMES 6:30pm Carbona Not Glue, 7:45pm She's In Bauhaus, 9:00pm Teenage Werewolves
TEENAGE WEREWOLVES - World’s best Cramps tribute return to England after their wildly successful 2019 UK tour ended in London’s World’s End with Magenta of Rocky Horror on stage with the band to sing the Time Warp! This sexy freak-out & visually intoxicating show started preaching the gospel of The Cramps from the pulpit-stages in Los Angeles (Viper Room, Whiskey a Go-Go) after the death of rock’s most-uninhibited singer, Lux Interior. . . TWs singer Jack Atlantis is from the same hometown as Lux and merge John Waters & Russ Meyers overtones to create an show loved by newcomers and hard-core fans alike.
“The Teenage Werewolves are the closest you can get to the real thing / creepy cool crooner Jack Atlantis channeling of Lux Interior was spell-binding” (LA Weekly). “One of the best rock shows I’ve ever seen” (David J of Bauhaus).
facebook - www.facebook.com/TeenageWerewolves

YouTube - www.youtube.com/channel/UCrb-pUVN3EINSWYqtHnpybg
instagram - www.instagram.com/jessica_habit
CARBONA NOT GLUE is the longest running RAMONES tribute band in the world. There's a fact! (It's even on Wikipedia)
Formed in 1994, they played their first punk gig at the legendary Tap O' Lauriston in 1995. That was when the RAMONES were still alive and still performing. Initially formed as a laugh, doing various covers. After a short while they needed focus and decided to do just RAMONES songs as they were fun and they all loved them. This was at a time when tributes bands were not that common. At the time there were only about 5 RAMONES tribute bands in the whole world. Carbona Not Glue even got a mention in Everett True's book Hey Ho Let's Go. When Simon and Robin went to New York, they were offered a gig at CBGB's but could not do it due to the costs etc... it was nice to be asked.
facebook - www.facebook.com/ScottishRamones