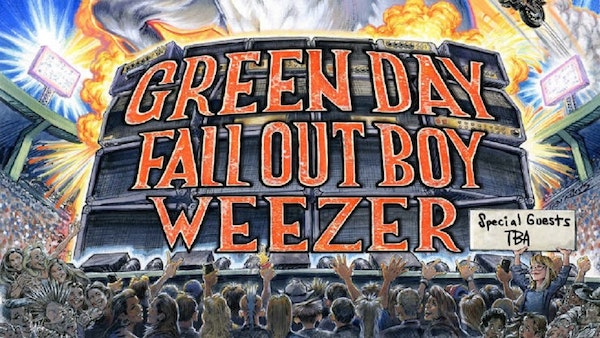 See all dates for The Hella Mega Tour

The Californian trio of Billie Joe Armstrong, Mike Dirnt and Tré Cool have been re-inventing punk since the late 80s. They shifted over 20 million copies of their breakthrough 1994 album 'Dookie', accompanied by the MTV heavy rotation of hit anthems like 'Basket Case' and 'Welcome To Paradise'. With 12 studio albums to their name, they've proved that punk is certainly not dead. Their career took an unexpected turn following 2004's concept album 'American Idiot' when it later spawned a stage musical, at first on Broadway then in the West End. Not even the legacy of the Sex Pistols managed to achieve a jukebox musical! The boys continue to release new albums and play worldwide tours, proving that they are certainly no American idiots.

Their music contains elements of punk and pop, but they aren't pop-punk. Likewise, their songs are emotional and their lyrics can be poignant, but they're certainly not emo. Fall Out Boy incorporate their dark sense of humour within their songs, which abound with clever, biting lines.

American garage-pop band who shot to fame with the massive worldwide hit 'Buddy Holly' whose up-beat sound and award-winning video directed by Spike Jonze and featuring clips from 'Happy Days' made it a permanent MTV favourite.