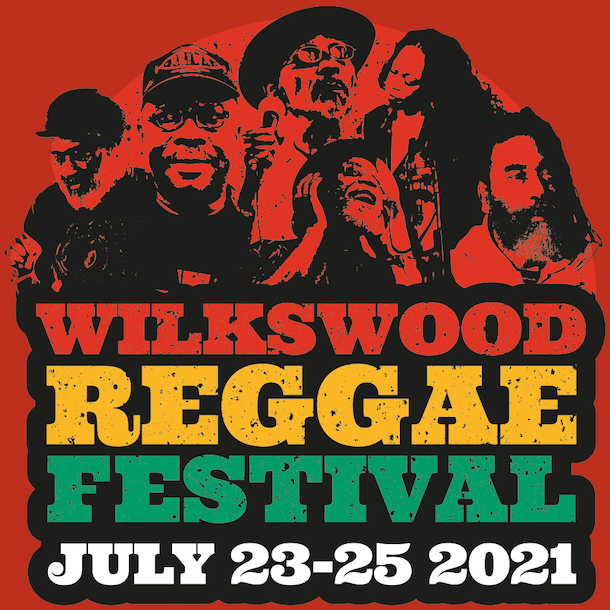 at Wilkswood Farm, Langton Matravers
View Tickets
Discover your top matches amongst the lineup via our Lineup finder

Held in the stunning Purbeck countryside in Langton Matravers on the outskirts of Swanage in Dorset, the Wilkswood Reggae Festival presents three days of reggae and camping over three days in the wood by the sea from Friday July 23rd to Sunday July 25th 2021.

This year's festival (originally scheduled from 2020 due to the coronavirus Covid-19 epedemic) will see reggae legends rub shoulders with upcoming artists and DJs from the UK and abroad with over 60 acts performing across three stages. Headliners on the main stage this year include legendary producer Mad Professor (performing with Sista Aisha, Sista Audrey, Canita and the Ariwa Posse Band), the evergreen Twinkle Brothers and an exclusive joint performance from reggae dignitaries Sandra Cross, Vivian Jones, John Mclean and The Robotiks.

The Jah Spirit Stage will this year feature an exclusive takeover on each day of the festival from three of the UK's top sound systems, Channel One, Mungo's HiFi and Sinai Sound, who will all be appearing for the whole day with their own custom-built speaker rigs. It's exceptional to get to experience these genuine sound systems outside of the carnival environment, so this is a real treat.

To top all this we will have an extremely rare festival appearance from the one-and-only Linton Kwesi Johnson, legendary dub poet and activist. The highly revered reggae raconteur presents an exclusive performance of his hugely influential poetry on the DJ Derek Stage.

Elsewhere a multitude of soundsystems, deejays and producers will perform on the Jah Spirit Stage, an eclectic collection of acoustic and spoken word acts will appear on the DJ Derek Stage and a posse of hot young DJs and selectors will be showcasing the best in drum & bass, dubstep and ragga in the late night Shhhbeen.

Both the Main Stage and the Jah Spirit Soundsystem Stage are under cover so the music carries on whatever the weather. Elsewhere there's a chillout zone, street food stalls (including a Jamaican jerk barbecue, wood-fired pizza and vegetarian/vegan food), the main bar serving draught beer and ice cold lager and the Rumshak's infamous rum cocktails; we're still trying to work out what the 'magic ingredient' is but they taste great and get you dancing!

The Wilkswood Roots Reggae Festival is a family-friendly festival and there is plenty to keep your little ragamuffins entertained including a dedicated kid's field and a wooded clearing featuring storytelling and music. To encourage the whole family to come along, we offer reduced prices for children up to the age of 17 and under-3s are free!

Organised by members of Bournemouth's Dubheart Collective, the festival takes place over three days at Wilkswood Farm in Langton Matravers and the ticket price includes full admission and camping for three nights. There is a glamping field with pre-pitched tents and campervans and caravans are welcome (for a small additional fee).

Direct from Jamaica with their ten-piece band, The Twinkle Brothers are true legends of Reggae. Led by Norman Grant, they began their career in the early ’60s as a trio, in a slick style similar to that of the Melodians and the Mighty Diamonds. In the early ’70s, the group hooked up with the influential producer and arranger Bunny Lee, a union that produced a number of massive reggae hits including “We Can Do It Too” and “Miss Laba Laba.” Today, the Twinkle Brothers continue to be true ambassadors of digital deep roots, taking their sound to countries with very different musical styles.

Powerful critiques on modern Britain, from the world's first reggae poet, he uses politics as an organising principle for his message and sound.

Channel One continue to be London's number one reggae sound system and have been pushing out their music at Notting Hill Carnival for over 30 years.

Mungo’s Hi Fi are a soundsystem and music production collective based in Glasgow. They produce and play music which blends Jamaican styles with the sounds of UK club culture, resulting in a unique take on Ska, Reggae, Dancehall and Dubstep that has made them firm favourites in the UK Bass Music scene.

With over 20 years of experience in the music industry, more than 12 albums and singles which were followed by headlined tours throughout Europe, America and Japan, and 7 international music awards, Sandra Cross is regarded as one of the leading forces of England’s ‘lover’s rock’ era. She has become one of the most successful and respected singing talents coming out of the UK.

Vivian 'Sugar Love' Jones has established a long and fruitful career as a reggae vocalist, having initially been regarded as a lovers rock performer. "Good Morning" topped the reggae chart and signalled the beginning of a run of hits like Sugar Love, Love is for Lovers , Strong Love for the singer. His popularity spread from the UK to Jamaica where his reputation continued to prosper. In 1988 he was acclaimed as the best reggae performer and won the award for four consecutive years.

McLean (born Anthony McLean, 23 April 1980) is an English singer from Dagenham, east London. He is currently signed to Asylum Records in the UK and Atlantic Records in the US. His debut single "Broken" was released on 26 October 2009. The song was co-written/produced by The Schizofreniks and first released independently on 26 March 2007 on Schizofreniks Records, and has since then accrued over 20 million hits across major social networking sites, including YouTube and MySpace.

Brother Culture is an MC based in Brixton, London. He started his career around 1982 for Jah Revelation Muzik sound system. As part of the Twelve Tribes of Israel Rasta brotherhood, Brother Culture toured in the USA, Jamaica, Caribbean and Canada throughout the 80s.

Chilled vibes from this Bournemouth based reggae outfit.