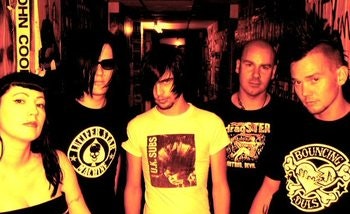 Loads of weird and raw bands at one of the best independent music venues in the country!

Lesbian Bed Death is a Gothic Punk / Hard Rock band from the UK, with a sound that displays a huge love for 80's Goth/Rock while delivering the music with a contemporary twist. A dark sense of humour runs throughout their songs which lends itself well to the lyrics about sour relationships and Horror movies. Check out the band's music videos on Youtube for a taster!

The Strays are pushing rock 'n' roll to it's limit, fusing a multitude of genres to create a unique modern sound with a gritty, vintage edge. Described as No Doubt meets Imelda May, The Strays performance style is larger than life, interactive, and deliciously unpredictable. After smashing onto the scene and releasing their debut EP in April 2017, the Cheltenham based garage rock ‘n’ roll band were soon endorsed by Vocalzoneand featured as ones to watch in UK Rock n Roll Magazine. 2018 was equally as successful, with the release of their second EP and numerous support slots with the likes of Republica and Eddie and The Hotrods, as well as being immortalised the Garage Band card game.

Kind of punk, kind of post-punk, kind of slap in the face, Who Killed Nancy Johnson? are one of the most incendiary live acts in the UK.