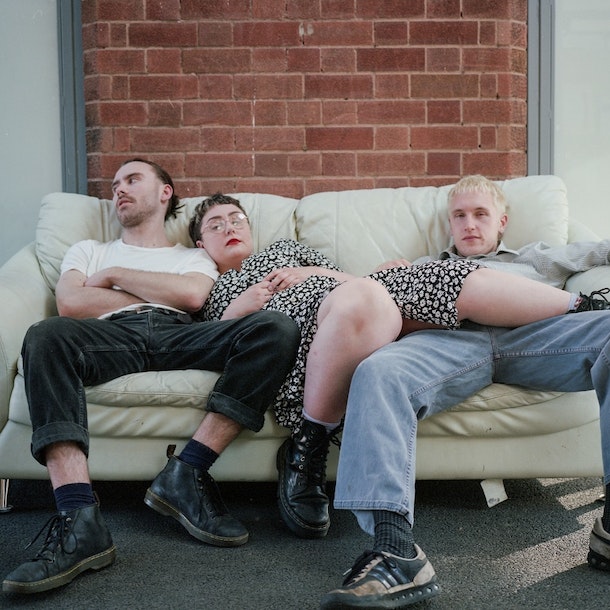 Nottingham lo-fi grunge trio Cai Burns, Lucy Hatter and Lawrence English are Kagoule. Sound-wise they recall the energy and ideas of Bikini Kill, the sugar-dusted grunge of Smashing Pumpkins and the angular rhythms and confrontational post-hardcore blueprint of Fugazi and Slint with Dinosaur Jr. stepping on the pedal. In 2014 Kagoule signed to legendry extreme metal label Earache, where they share a home amongst sonic pioneers such as Napalm Death, Godflesh, Fudgetunnel and Carcass.

Formed in Leeds, but like Gang Of Four, born in a variety of other places, Cowtown are made up by David Michael Shields (drums), Hilary Knott (keybass/vocals) and Jonathan Nash (guitar/vocals) and play econo, dynamic, over-stimulated rock music that embraces a heavily abridged history of rock n’ roll. Serious about fun, the band are a firm favourite of BBC 6 DJ Mark Riley, performing music with an emphasis on positive expression and confronting collective anxieties, creating live shows that focus on what they enjoy and discarding the rest. Drawing influences from bands like The Coneheads, Devo and The Breeders, as well as films such as Teen Wolf and Ghostbusters, songs are later distilled into their absolute fundamentals. It’s not about what they want but what they need, with the delivery being as urgent and tightly wound as possible.

Big Joanie are a black feminist punk band describing themselves as 'like The Ronettes filtered through 80s DIY and 90s riot grrrl, with a sprinkling of dashikis'. Based in London, Big Joanie formed in the summer of 2013 to play at First Timers (a gig where each band plays their set for the very first time) at the close of the year. The band also functioned as a space where its members (Stephanie Phillips, Chardine Taylor-Stone and Estella Adeyeri) could be completely themselves as black women, and within it discover their own power in creativity. Big Joanie are influenced by Nirvana, Riot Grrrl, Throwing Muses, X-Ray Spex, The Bags, My Bloody Valentine, The Ronettes, Darlene Love, Tina Turner, Jesus and the Mary Chain, Breeders, PJ Harvey, Shop Assistants.

Hailing from Florida, Emperor X is a one man musical maverick who can usually be found playing in your local underpass, or perhaps on the back of a train somewhere.

Cryw**k are a Manchester based anti-folk band. They mostly write sad songs and have been told they are the worst named band in the country.

GENN (pronounced Jen) are a four-piece musical riot, ready to rock your patriarchal ears and mess with your brain. They’re serving alternative post-punk madness fresh out of their DIY framework, as they gear up to take over the world from their humble Maltese roots. Leona (vocals), Janelle (guitars), Leanne (bass) and Michelle (drums) throw their fiery personalities into overdrive, and create a knicker-twisting yet introspective style of music.

Portraits (formerly Lost At Sea) are a new six piece Melodic Hardcore outfit from West Yorkshire. The band takes a wide range of influence or fans of Architects, Heart In Hand, Devil Soul His Soul, Heights, Parkway Drive, Close Your Eyes, While She Sleeps, Counterparts and even We Are The Ocean and You Me At Six.

‘The unofficial queen of music that makes you want to dance and cry at the same time.’ Solo electro-punk artist and connoisseur of ‘sad dance’ music N/\L/\ is the work of Leeds based composer/producer Holly Readman. An alchemist of remorseless beats and jarring basslines sprinkled with witch hex vocals preaching truths of mental health and injustice.

Blóm from Newcastle features two-thirds of the much-missed Tough T*ts. This fresh outfit offer a fearsome and raw punk assault.

Formed in a broken bedroom in Bristol, on the verge of homelessness, and rife with anger, The Menstrual Cramps were born. Politics on the brain and injustices surrounding them, they jumped ship to a dive in London and recorded their debut album ‘We’re Not Ovaryacting’ on distorted acoustic guitars, calling on the world to ‘Save the Badgers’, and ‘Cull the Tories’. They are on a mission to ‘Make Girls Feel Good’, empower all womxn and end inequality and injustices across the world