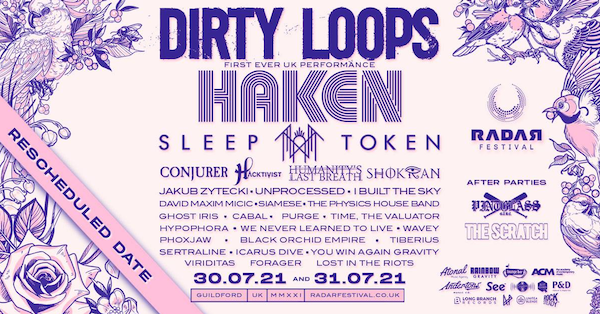 After the success of their first year, RADAR Festival is back at Casino in Guildford for another two days of some of the world's most loved and newest contemporary progressive rock and metal bands, playing across two stages with no clashes.

Formed in 2009, Dirty Loops is a Swedish power trio that twists pop music in a way never done before.

London 6-piece creating an epic journey into the realm of progressive sound. The UK's PROG Magazine describes them as "one of the brightest young bands in the progressive sphere right now."

Sleep Token are a masked, anonymous collective of musicians (that may or may not be prolific artists from a variety of different projects); united by their worship of an ancient deity crudely dubbed "Sleep", since no modern tongue can properly express it's name. This being once held great power, bestowing ancient civilisations with the gift of dreams, and the curse of nightmares. Even today, though faded from prominence, 'Sleep' yet lurks in the subconscious minds of man, woman, and child alike. Fragments of beauty, horror, anguish, pain, happiness, joy, anger, disgust, and fear coalesce to create expansive, emotionally textured music that simultaneously embodies the darkest, and the brightest abstract thoughts. He has seen them. He has felt them. He is everywhere. Led by the perpetually tormented, supremely talented Vessel, creates music that brings to the fore our most submerged thoughts and feelings, coaxing them from the desolate, terrifying caves of our subconscious mind.

Milton Keynes five-piece Hacktivist take their name from a term used to describe activists who, through computers, spread political messages. Primarily known as a metal band who blend their heavy sounds with rap, strangely frontman J Hurley came from a grime background and had absolutely no knowledge of the metal scene. The end result is a sound containing all the monstrous riffs and heavy beats you would expect from a metal gig, but combined with the energy and vibes of a grime or hip-hop show. People are already saying Hacktivist have the same dance/rock crossover potential as that of the Prodigy.

Led by the dual vocal/guitar attack of Dan Nightingale and Brady Deeprose, Conjurer are a band who are already attracting attention from the metal press and industry. The band have an impressive touring history, despite still being at the very beginning of their journey. Tours with Weedeater, OHHMS, shows with Employed To Serve, Venom Prison, Oathbreaker, and festival appearances at Bloodstock Open Air, Damnation Fest, UK Tech Fest, Doom Over London and more besides place Conjurer in rarefied but highly deserved company.

We Never Learned To Live

Bristol based rock outfit Phoxjaw have built up a solid reputation in the short time since they formed in the Summer of 2016, garnering support from the likes of Kerrang! and Metal Hammer. Since their inception they have played across the UK alongside worldwide renowned acts such as Black Foxxes, Black Tusk, and Avon (Alfredo Hernandez of Queens of the Stone Age). While possessing a sound all of their own, they have been compared to the likes of At The Drive-In and Cave In, owing to their melodic tenacity and driving riffs, mixed with their ferocious energy on stage. Phoxjaw’s heavily distorted sounds coupled with their intense lyrics and emotive vocals have seen them championed by the likes of Kerrang Radio’s Alex Baker who praises their ‘cataclysmic riffs’, as well as Scuzz’s Alex Herron who labelled them one of the best new bands he’s heard.

Melody. Power. Beauty. Ferocity. This is Black Orchid Empire. BOE’s powerful music resonates with fans of QOTSA, Deftones and Royal Blood. Driven, determined and exceptionally talented, this ferocious trio infuse complex melodies and mammoth riffs to create instantly memorable – yet beautifully vulnerable songs. Following performances alongside heavyweights Biffy Clyro, Skunk Anansie and Editors, as well as winning Emergenza UK, the bands high-impact show has seen them steadily grow in acclaim. Thriving in the resurgent British rock scene, Black Orchid Empire are perfectly poised to be one of the breakthrough acts of the year.

Sertraline are a five piece alternative rock outfit from Stoke-on-Trent, UK. Led by the enchanting Leeds lass Lizzie on lead vocals, the band features four ex members; Tom, Josh, Mike & Hendo, of local band Blue Origin. Aware that they, as a collective, wanted to create music that sounded fresh and evocative set about auditioning vocalists. Several auditions in & the sparkling personality that is Lizzie, bounced in & stole the position from any likely candidates. And Sertraline was born.