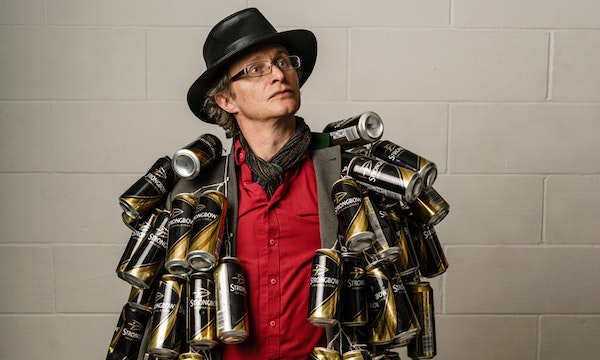 Simon is a British Comedy Award nominee, Chortle Award winner, Perrier Award nominee, and Sony Radio Award winner. He's had his own Radio 1 series and several Radio 4 series, along with several cult television series including BBC2's Attention Scum. His most recent television appearances include The Alternative Comedy Experience (Comedy Central), It's Kevin and Stewart Lee's Comedy Vehicle (BBC2). 'One of the funniest, most original comedians of the past twenty years' (The Guardian) 'Convention-defying, innovative stuff. Simon Munnery is a must-see' (The Times) 'Simon Munnery is an avant-garde comedy god' (Time Out) 'Intelligence, wit and originality... Simon Munnery, the God particle of Alternative Comedy' (Chortle).

Hilarious character comedy and Sony Gold Award winner, Alan Parker: Urban Warrior shot to fame in the 1990s with his own radio series and numerous TV appearances. A bedsit anarchist inspired by the lyrics of Sham 69, Alan is a self-appointed spokesperson for for the dispossessed generation. He is the finest character creation of the award-winning comic Simon Munnery, widely held to be the finest and most inventive comedian of his generation.