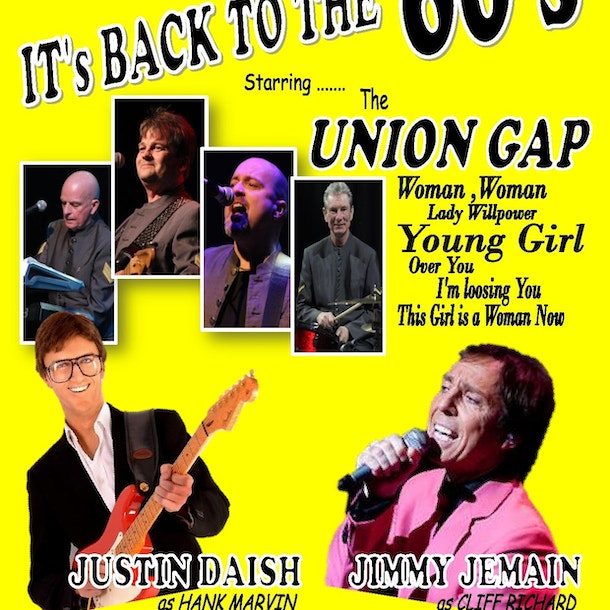 For many years now The Union Gap UK has gained great success on the 60's circuit playing at all the major festivals, theatres, holiday centres etc throughout the UK and Europe. The band has worked extensively to put together a repertoire of classic songs from the '60s and '70s, which they perform either in the original form or in their own unique style – many of which appear on their various studio albums. The band have also devoted a great deal of time and effort to perfect their concert sound, which is always complimented upon wherever they appear. The Union Gap UK today are:Tom Harding, Simon Paul, Mike Ellis and Paul Grogan.

A Tribute To Cliff Richard & The Shadows - The Golden Years

Jimmy Jemain IS the world's best known Cliff Richard Tribute Artiste and has, indeed, travelled extensively across the globe presenting his fantastic show. Jimmy Jemain & The Rapiers (who are the proud recipients of a trophy plate for “Services to Rock ‘n’ Roll” which they received at The 33rd Rockers’ Reunion Winter Party), combine in this highly believable show, giving an unrivalled performance as Cliff & The Shadows. Audiences can look forward to an evening of fabulous nostalgia returning to the early days of Pop, featuring all Cliff’s hits of that unforgettable era.