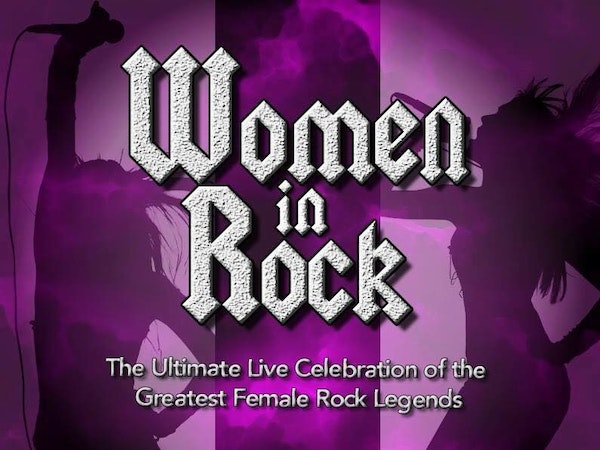 Get ready for this one-of-a-kind, high-octane show featuring songs from the world’s greatest female rock legends.

Since exploding onto the live music scene in 2016, Women in Rock have been busy wowing audiences up and down the UK in theatres and art centres with their sell out show, delivering some of the UK’s finest vocals and musicianship.

Having been invited twice to Europe to perform for Harley Davidson to audiences of up to 120 thousand in Prague and Portugal, their show goes from strength to strength. With songs made famous by the world’s greatest female rock artists, costume changes and a full choreographed show, Women In Rock has something for everyone, from Joplin to Quatro, Turner to Cher, Blondie to Joan Jett, this is must see show that will leave you cheering for more.

Book your tickets now and join us to celebrate women who simply rock!

The UK’s only live show dedicated to the World’s greatest Female Rock Legends. With three of the most powerful female singers on the live music scene to draw upon, together with an awesome touring band, Women In Rock delivers a showstopping performance covering all the greats through the decades. Women in Rock pays tribute to: Pat Benatar, Stevie Nicks, Joan Jet, Heart, Vixen, Cher, Bonnie Tyler, Kiki Dee, Janice Joplin, Alanis Morrissette, Patti Smith, Halestorm and many more. The raw talent on show from the three Women in Rock singers is breathtaking. Collectively they have a huge wealth of talent and experience, performing in The USA, Australia, Asia and China, with artistes including Alicia Keys, Rihanna, Toyah Wilcox, Vampires Rock and The National Orchestra of Great Britain to name but a few. Not just a tribute, but a celebration of all Women who simply Rock!