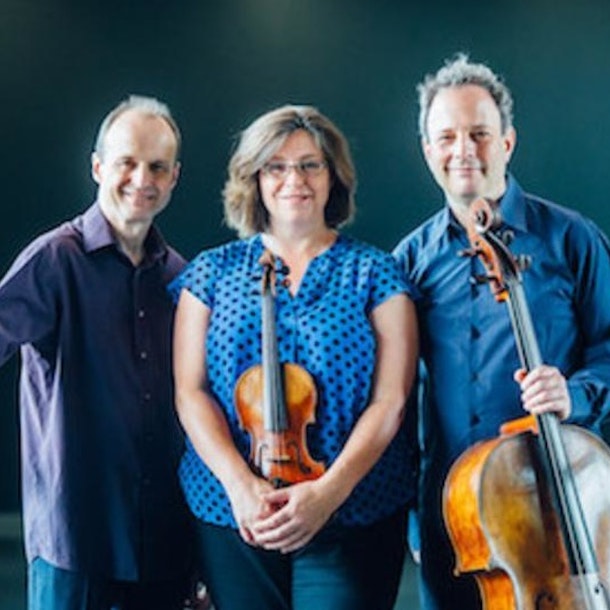 'We were first entranced by the Goulds at the Stephen Joseph Theatre in Scarborough and at the Ryedale Festival. We have greatly enjoyed our third Corbridge Festival. What we find so special is that this intimate music is made by musicians who love playing together. We are planning to come every year.'
Judith Appleby, audience member from Yorkshire

Join the Gould Piano Trio, clarinettist Robert Plane and acclaimed guest musicians for three days of intimate chamber music in the historic and picturesque town of Corbridge, Northumberland. There’ll be Gallic charm in the shape of Faure’s Piano Quartet and Saint-Saens’s Second Piano Trio, alongside the intense passion of both of Brahms’s string Sextets. Our Olympic-themed salon concert features music from the cities and years of past Games, from John Ireland in London and Ravel in Paris to Rautavaara in Helsinki. We also present the dazzling ensemble Estrella, from New Zealand in our ‘Rising Stars’ showcase. On their first visit to the UK, this is 8 hands at 2 pianos like you’ve never heard before. With concerts throughout the day, our ever-popular Family Concert and a choral and instrumental Festival Service, the Corbridge Chamber Music Festival 2013 fills St. Andrew’s Church, Corbridge with glorious music from the 10th till the 12th of August.

Formed in 1987, the Gould Piano Trio are are Lucy Gould on violin, Richard Lester on cello (replacing Alice Neary) and Benjamin Frith on piano. The trio has established itself as one of Britain's most exciting chamber ensembles, performing in major venues throughout the UK and overseas as well as making appearances on BBC Radio 3. Widely acclaimed for its performances on both the concert platform and in the recording studios, the Trio recently celebrated its quarter century landmark. The diversity of the Trio’s discography, including masterworks and neglected gems, is also a hallmark of its international success, while commissioning and performing new work is also an important part of its commitment to creativity and innovation. The Trio also mentors young musicians and hosts the annual Corbridge Music Festival which it founded 20 years ago with clarinetist Robert Plane.

Widely-respectde classical clarinettist who is much sought-after both as a soloist and chamber musician since winning the 1992 Royal Over-Seas League Music Competition in London.

A cellist with a busy career as a chamber musician, soloist and teacher. She is also principal cellist with Welsh National Opera.

One of Norway's most prominent conductors, and the first violininst in the Engegard Quartet.

A female piano quartet from New Zealand - two pianos, eight hands. They have a wide ranging repertoire, from classical to contemporary works, including pieces dedicated to them by leading New Zealand composers.

Award-winning classical pianist and accompanist from South Yorkshire. A regular broadcaster, he tours extensively and has many fine recordings to his credit.

An international renowned viola player, active both as a chamber musician and an orchestral soloist.

Highly acclaimed, award-winning cellist who has performed with major orchestras and as a soloist throughout Britain, the United States and Europe. 'A player of the highest calibre, she is 'secure in technique and astonishingly mature in her musicianship... a player of rare gifts' (The Times).