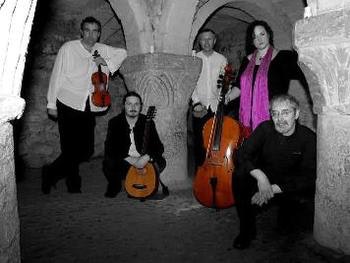 This 5-piece band from Oxford, who specialise in traditional English songs and music, have been delighting audiences for over 25 years with a combination of powerful vocals and vigorous dance tunes, performing inventive arrangements on a variety of instruments.

The fact that each member is not only a fine singer but also an instrumentalist makes the band quite unique. In that time, they have produced numerous CDs, and were able to win fans outside the folk scene through the popular Past Times retailer. All five members of the band have been thoroughly immersed in the music, and perform in other combinations as well as Magpie Lane.

Their sound is unmistakeably English, although they have moved on from their original focus of exclusively Oxfordshire material. They use an eclectic range of instruments as well as vocal harmonies which are a joy to hear, offering a majestic swathe of sound.

This is a rare chance to see and hear a 'big band' in such intimate surroundings, so make the most of it.

Magpie Lane's music is unmistakably rooted in the English tradition. This 6 piece band is based around the composition of a nineteenth century village band with fiddle, cello, concertina, whistles and percussion to the fore. The group's instrumental prowess is matched, if not surpassed, by its vocal strength with melodious solo performances and powerful harmonies as the band's trademarks.