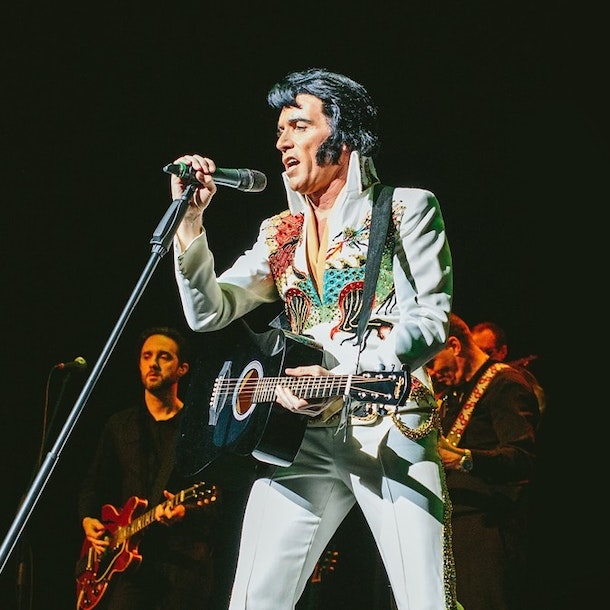 There are Elvis tributes… and then there’s Lee Memphis King.

Lee Memphis King, Europe’s most successful Elvis Presley tribute artist, recreates the essence of the King with consummate ease and an almost unbelievable combination of stunningly accurate vocals and incredible passion in every performance.

This brand new production is dedicated entirely to the ‘Vegas Years’ when Elvis would perform in Las Vegas and tour throughout the US and Canada – the definitive record of these performances are contained in the films ‘Elvis- That’s the Way It Is’, ‘Elvis On Tour’ and the ‘Aloha from Hawaii’ concert.

The show is enhanced by an orchestra of world class musicians and backing vocalists coupled with impressive video screen projection mapping out Elvis’s life and music.

Lee Memphis King recreates it all with stunning authenticity – the voice and equally important for Lee, the passion and energy that Elvis put into his songs. He leaves audiences in no doubt that they are witnessing the world’s No 1 Elvis Tribute Artist. Pure entertainment and Pure Presley.

Memphis King is regarded as one of the most talented Elvis Presley tribute artistes in the world. He recently scored a significant success with Elvis connoisseurs during an international Presley Showcase in Canada. An accomplished singer in his own right with a truly superb range of voice he is also a natural-born entertainer. Together with his acclaimed band Deep South and Musical Director Mr Bip they provide an exceptional show reliving the magical memory of Elvis Presley and much more.