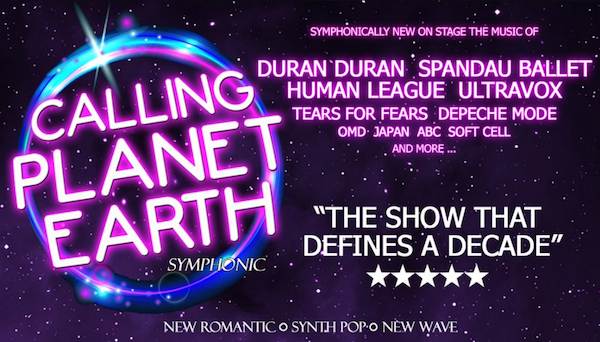 Recreating the electrifying 80s taking you on a musical memory right back to the nightclub dance floor!

Relive, sing, dance to many of the best 80s songs ever from artists such as Duran Duran, Spandau Ballet, Ultravox, The Police, Tears For Fears, ABC, Japan, Human League and more. Unforgettable hits such as Planet Earth, True, Tainted Love, Vienna, The Look Of Love and many, many more!

This show is without doubt the most stunning 80’s experience ever brought back to the future!

This show was rescheduled from 27th March 2021.

A New Romantic Symphony that goes on a journey through one of the greatest musical era’s of all time – the electrifying '80s Featuring songs from now legendary artists such as Duran Duran, Spandau Ballet, The Human League, Ultravox, Tears For Fears, Depeche Mode, Omd, Japan, ABC, Soft Cell and many more. Performed by an incredible live band with awesome symphonic arrangements combined with stunning vocals and cast this is the must see show that simply defines a decade.