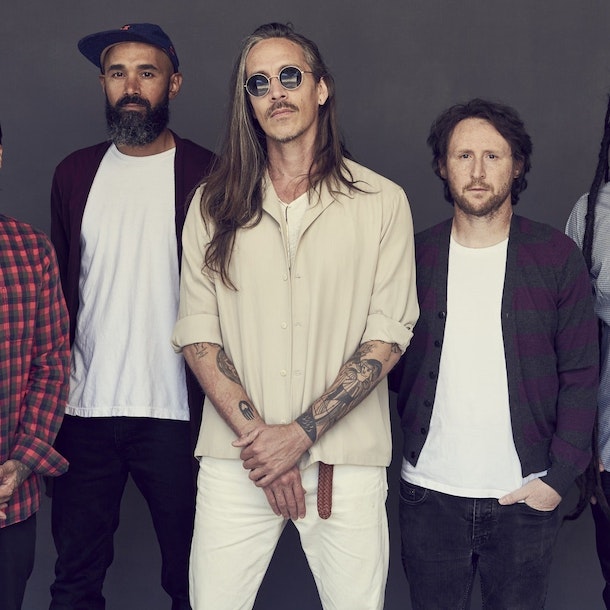 Having sold over 13 million albums worldwide, Incubus' extraordinary career has spanned over a decade, and includes six studio albums, which have spawned a total of thirteen Top 10 Rock hits with four singles debuting at #1 upon their release.

The multi-platinum quintet's last studio album 'Light Grenades' debuted at #1 on Billboards Top 200 (highest charting album debut of bands career) and has sold over 800k copies to-date in the US.

Since first coming together in 1991, the influential quintet featuring Brandon Boyd [vocals], Mike Einziger [guitar, piano, backing vocals], José Pasillas II [drums], Chris Kilmore [turntables, keyboards], and Ben Kenney [bass] have consistently elevated themselves and alternative music to new creative heights. The California band’s sales eclipse 23 million albums worldwide to date with multiplatinum and platinum certifications from around the globe. Most recently, 2017’s 8 bowed at #4 on the Billboard Top 200, marking their fifth consecutive Top 5 debut on the respective chart. Additionally, they maintain their status as a streaming phenomenon, averaging 4.1 million monthly listeners on Spotify and clocking over 1 billion-plus streams. They continue their next chapter in partnership with ADA Worldwide, with the new EP Trustfall (Side B) led by the single “Our Love.” 2019 saw them celebrate the 20th anniversary of their triple-platinum third studio album, Make Yourself, with a sold-out tour. Containing the singles “Pardon Me”, “Stellar” and “Drive”; Make Yourself was a pivotal moment in the band’s history. The London shows will see Incubus performing songs from that era as well as other songs spanning their career.

fiN are Southwest London schoolmates-turned-twenty-something guitar pop visionaries Jonny Garner, Simon Harding, Kerry Lambert and Luke Joyce. The band decided to leave behind their grunge covers band roots in November 2008, utilising their childhood roots in Motown, The Beatles, Led Zep and Nirvana, and channelling their creative forces for the reinvention of alt.rock.