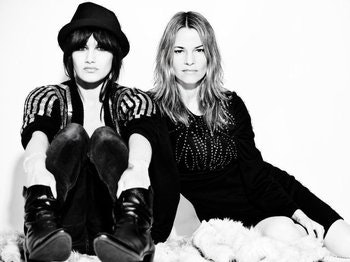 The Los Angeles-based Uh Huh Her is the brainchild of musician/actress Leisha Hailey, formerly of alt-pop band The Murmurs and Camilla Grey, bassist and keyboardist with lo-fi rock band Mellowdrone. They began making music together at the beginning of 2007, writing emotionally charged electro-pop tunes.

Raw, punchy all-girl garage-punk-pop band, compared to bands like X-Ray Spex, The Gossip and Sleater-Kinney. Vocalist Zoe McVeigh has passion and power in equal amounts and her vocal talents will astound. One of the very best bands at last year's Ladyfest London and their debut release will be on Purr Records!