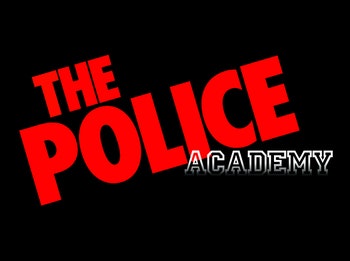 A very special tribute to Sting and the Police. Acapela welcomes back The Police Academy which includes:

The Sting Operation is a live tribute to Sting that is devoted to putting on the ultimate authentic stage show, recreating the music of one of the most enduring singers of the last three decades. Starting in the late ’70s with The Police, and following up with an illustrious solo career spanning over 30 years, Sting has cemented himself as being one of the greatest musical artists of our time, and The Sting Operation is proud to perform all the most popular hits from his considerable catalogue, including Fields Of Gold, Englishman In New York, If You Love Somebody Set Them Free and many others. After seeing The Sting Operation perform, you will undoubtedly agree… “It’s Probably Him”!

The Police Academy
Many tribute bands claim to have one particular element of their act “just right” – the look, the sound, the equipment, the musicianship… Yet rarely do you find a band where each one of these individual components has been painstakingly addressed in just as much detail as the last. The Police Academy, however, do exactly that. Recreating and reproducing a totally authentic experience that allows audiences to enjoy and immerse themselves in some of the best known songs ever written by truly, one of the World’s greatest ever bands.
Roxanne, Message In A Bottle, Every Breath You Take, King Of Pain, Every Little Thing She Does Is Magic and Walking On The Moon are just few of the highlights in a set that could legitimately be described as “all killer, no filler”. The high-energy and engaging nature of the band’s performances ensures that they willingly command your full attention from the very first note to the last, totally immersing you in the music and ensuring you have just as much fun as they do along the way.

This event was rescheduled from January 2021

The Police Academy recreate the authentic experience of seeing a live concert by one of the biggest bands of all time at the height of their career. Playing all the hits of The Police such as 'Every Breath You Take', 'Message In A Bottle', 'Roxanne', 'Walking On The Moon', 'Every Little Thing She Does Is Magic', 'Don't Stand So Close To Me' and many more. You'll be amazed at the accuracy of the performance by this incredible 3 piece tribute band.