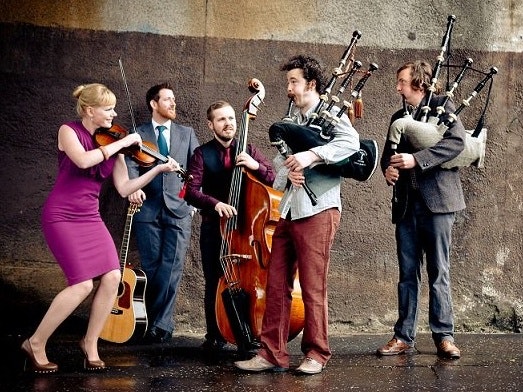 at The Met, Bury
Passed

Dùsgadh (n. awakening) is an exciting new streaming collaboration between Scottish Bafta winning animator Cat Bruce and internationally renowned, multi award winning folk group, Breabach.
This unique and innovative project takes the form of an animated film with original score. Based on The Sea Maiden a folkloric tale collected by John Francis Campbell, the film is available to view in Gaelic and English, narrated by renowned tradition bearer Margaret Bennet. It features a soundtrack comprising five new pieces of music, one from each of Breabach’s five members. It is a powerful and poignant piece of work conceived and delivered throughout a turbulent and challenging year for the arts; all music was written, recorded and produced individually, from home.

The film is accompanied by a virtual tour across the UK this February offering audiences the opportunity not only to support the artists, but also some of the bands favourite venues and festivals. The hour long ‘evening with’ presentation features behind the scenes footage and unseen live performances as well as a Q&A hosted by BBC Radio Scotland broadcaster and musician Anna Massie. The band will release a limited edition CD of the soundtrack and a limited run of art prints to accompany the tour.

Scottish firebrands Breabach are one of the most talked about bands on the folk scene. Their innovative celtic style, blending double bagpipes, flute, fiddle, song and Scottish stepdance, brings to the stage, flare, excitement and diversity rarely seen from such a young group. Their enviable musicianship is coupled with a delightful ability to connect with their audience and has gained Breabach international recognition as one of Scotland’s leading new acts.