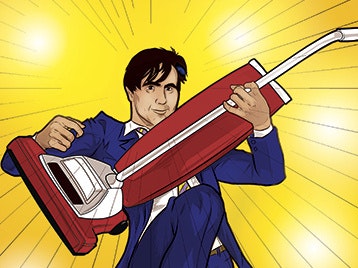 In support of his autobiography 'I Formed A Band', Art Brut frontman Eddie Argos gives a spoken word tour discussing life on the road in a cult band.

He spent the last three years writing 'I Formed a Band'. The story begins with him playing the vacuum cleaner on stage in Poole, and ends up with Art Brut recording the album 'Art Brut VS Satan' with Black Francis in Salem, Oregon. In between you will discover the answers to these questions:

Just how hard did Eddie kick Paul McCartney when he met him?

What colour did Russell Senior from Pulp try and make Eddie sing in?

Which of Art Brut's songs is Liam Gallagher's favourite, and did Oasis really sing a Half Man Half Biscuit song at Eddie? Or was it a psychotic episode?

What is it like to get into a fight with The Magic Numbers, Kele from Bloc Party and various members of The Bravery? (luckily not all at the same time).

What question did Conan O'Brien ask Jasper Future that he didn't know the answer to?

Why does Al Jourgensen from Ministry think Eddie is a famous singer called Franz Ferdinand with a hit single about his penis?

What valuable lesson did Eddie learn from Anton Newcombe at the Red Rocks Amphitheatre Colorado?