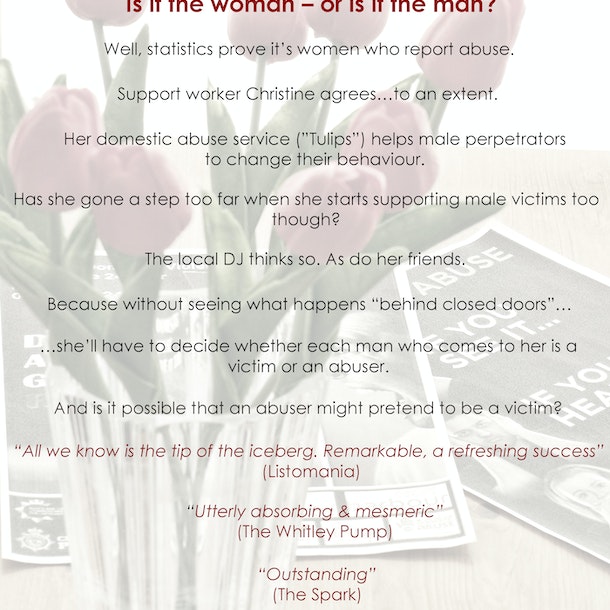 Imagine you can hear a couple fighting - but you can’t see who’s raising their fists.

How do you decide who’s in danger - is it the woman…or is it the man?

Has she gone a step too far when she starts supporting male victims too, though?

The local DJ thinks so. As do her friends.

Because without seeing what happens “behind closed doors”…

…she’ll have to decide whether each man who comes to her is a victim, or an abuser.

And is it possible that an abuser might pretend to be a victim?

The very first play to explore these topics, “Tulips” is inspired by many true stories – including two celebrity court cases (those of Johnny Depp and Caroline Flack) which captured the UK’s attention in 2020.

Produced by Secret Stories C.I.C, “Tulips: A Radio Drama” is an updated re-working of the original stage play that was toured across the South East in 2019; shortlisted for the Putney Theatre Company’s “Revolutions” award; and featured on both BBC South Today and BBC Radio Berkshire.

However, over 14 theatres declined to present it - with some expressing concerns about the subject matter. Indeed, the last drama to explore similar topics (the 1993 CBS television movie “Men Don’t Tell”) was only aired on television once due to similar concerns.

But with record numbers of people asking “am I being abused?” during 2020, Secret Stories (the theatre company behind the production) feel that questions about gender, domestic abuse and male behaviors are more relevant than ever – with the radio play offering a unique opportunity to hear both sides of the argument.

As such, a special Q&A / discussion session with the writer, director and cast will be held on 5th May 2021 between 7.30pm - 8.30pm. Anyone who wishes to share their reactions or ask a question can visit www.southhillpark.org.uk/events/tulips-zoom-qa/ to book a place and/or to submit questions in advance of the session.

“Tulips” features Victoria Paterson as Christine; Belinda Duffy as Scarlet; Peter Tavener as Jason / DJ Derek Hogarth; and writer/director Michael Beakhouse as Alex. The play was recorded and mixed by Spriggan Productions; with flyers and promotional photography by DVision Images.

“All we know is the tip of the iceberg. Remarkable, a refreshing success” (Listomania)