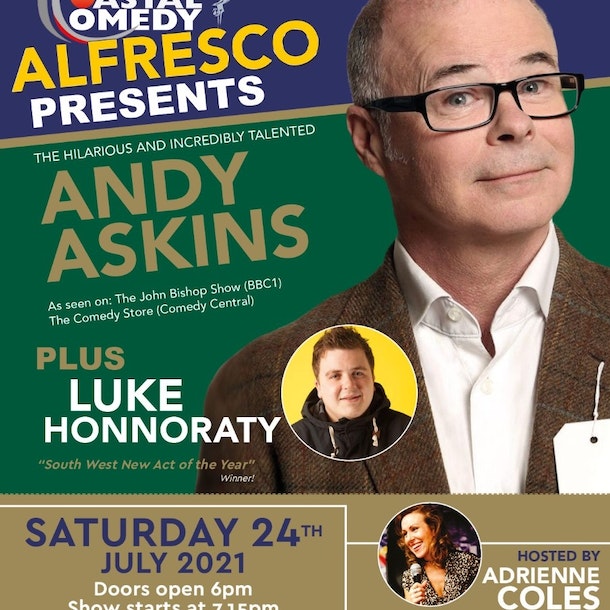 Come and enjoy a top night of live stand-up comedy sponsored by TWK Scaffolding and Lucy Beck – the Lawyer wh0 listens, outside at Bournemouth Electric Club!

As seen on:
The John Bishop Show (BBC1)
The Comedy Store (Comedy Central)

About our headliner: Andy Askins is a diminutive figure who exudes an air of vulnerability as he steps up to the microphone armed with a guitar and a cheeky grin. It’s an overwhelmingly misleading demeanour which serves to heighten the impact of the killer lines that he delivers.

Andy has previously had the honour of working with Michael McIntyre, Lee Evans, Alan Carr, Jimmy Carr, Micky Flanagan, Harry Hill, Rhod Gilbert, Bill Bailey and Jack Dee, to name a few stand-up luminaries and we can’t wait to welcome him to the Electric Club.

“ALTHOUGH HE LOOKS MILD-MANNERED AND STUDIOUS, HE ACTUALLY PACKS A WRY, CHEEKY WIT. THERE IS, MOST DEFINITELY, SOMETHING WARMLY ALLURING ABOUT HIM. HIS WINNING PERSONA GOES A LONG WAY.” Chortle

Opening the show is the hilarious Luke Honnoraty with his award-winning stand-up who burst onto the circuit in 2010 as the winner of the 'South West New Act of the Year' on his 3rd ever gig! Luke has gone from strength performing alongside the best names in comedy including Matt Richardson, Russell Kane, Katherine Ryan and Joel Dommett.

Andy Askins' air of vulnerability and innocent child-like qualities mislead the crowd heightening the impact of his killer lines. With his guitar and his wickedly dry sense of humour he captivates everybody with an eclectic mix of offbeat comical songs and parodies. A talented musician with an appealing voice and cheeky magnetism, he never fails to leave his mark. Dark, dark humour and killer timing. 'An awful lot of charm. Although he looks mild-mannered and studious, he actually packs a wry, cheeky wit. There is, most definitely, something warmly alluring about him. His winning persona goes a long way...between the songs, the charming banter works well' (Chortle).