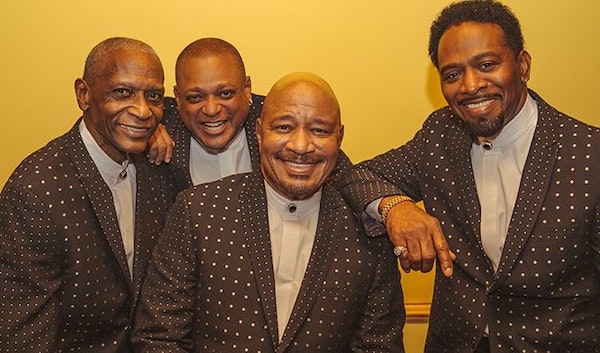 This show was rescheduled from 27th October 2020.

The Stylistics are known instantly for their many recognisable hits such as the Grammy nominated ‘You Make Me Feel Brand New’ plus numerous classics including ‘Can’t Give You Anything (But My Love), ‘Let’s Put it All together’, ‘Stop Look Listen’, ‘You are Everything’, ‘Betcha by Golly Wow’, ‘Sing Baby Sing’ and more.

The Stylistics remain the real deal, fabulously entertaining and musically breathtaking, plying audiences with the hits that made them a household name

In 1966, The Stylistics formed in Philadelphia, PA from two groups, The Percussions & The Monarchs. When members from each group were drafted, the remaining members joined forces to become The Stylistics. The original group lineup was Russell Thompkins Jr., Herb Murrell, Airrion Love, James Smith, and James Dunn. Their first song, You're a Big Girl Now, hit #1 in Philadelphia, and other cities soon followed. Bill Perry then contacted Avco Records and made a record deal. Hit producer Thom Bell produced their first album, The Stylistics, featuring hit songs "Stop, Look, Listen To Your Heart", "You Are Everything" and "Betcha By Golly Wow". The album's success was phenomenal, and continued with the release of their second album, Round Two. Herbert Murrell and Airrion Love are the two original members still singing with The Stylistics. Friends since jr. high, Airrion Love & Herb Murrell have kept the music alive, and they're still touring the world. Former lead singer, Russell Thompkins Jr, left the group in 2000. In 2011, Jason Sharp, former lead singer of Heatwave, joined The Stylistics. In 2018, Barrington “Bo” Henderson, formerly of The Dramatics, Lakeside, and The Temptations, joined The Stylistics as their new lead singer. The Stylistics current lineup consists of singers Airrion Love, Herb Murrell, Jason Sharp, and Barrington "Bo" Henderson.