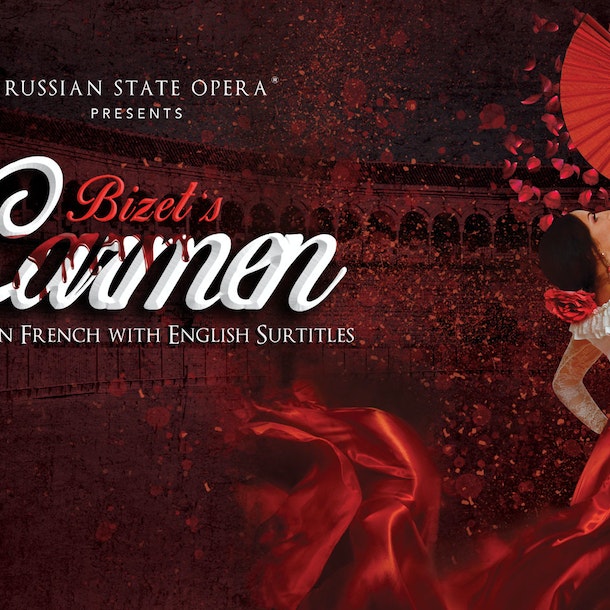 After its successful season of Madama Butterfly and Tosca last year, Russian State Opera returns to delight you with the powerful and dramatic production of Carmen – feel the thrill of fiery passion, jealousy and violence of 19th century Seville Bizet’s most popular opera.

Carmen tells the story of the downfall of Don José, a naïve soldier who falls head over heels in love with Carmen, a seductive, free-spirited femme fatale. The infatuated Don José abandons his childhood sweetheart and neglects his military duties, only to lose the fickle Carmen to the glamorous toreador Escamillo.

The music of Carmen has been widely acclaimed for the brilliance of its melodies, enthralling atmosphere and orchestration, as well as for the skill with which Bizet musically represented the emotions and suffering of his characters. The Toreador Song is among the best known of all operatic arias. The rich and colourful vigour of the gypsies’ scenes will have you on the edge of your seat, the vibrancy, enthusiasm and intensity of the performances will reverberate long after the final curtain has fallen.

Love, treachery, passion and betrayal, Carmen has it all.

Featuring an impressive cast and accompanied by a live Orchestra numbering over 30 musicians. Music by Georges Bizet. Sung in French with English Surtitles.

Amande Concerts is a production company that is behind the brand of Russian State Ballet and Opera House that now performs over 200 different classical shows every year. Over the years we have been focusing on delivering the highest quality Russian ballet and opera productions to British and European audiences. We have a vast experience, specialising in Russian performing arts and are here to help you to start your journey. The Russian State Ballet and Opera House was created to present the highest quality and passion for ballet and opera. Over the past 15 years we have worked with numerous companies and artists from Russia and decided to incorporate only the best under the umbrella of The Russian State Ballet and Opera House. Unlike many other companies touring Western Europe, we only focus on working with recognized theatres in the Russian Federation that have solidly established companies, boasting a core of experienced directors and performers who have graduated from the best artistic institutions in Russia and the former Soviet Union. Our logo is synonymous with high quality productions and we hope you will be part of our growing family of supporters and hope to see you soon at one of our performances!