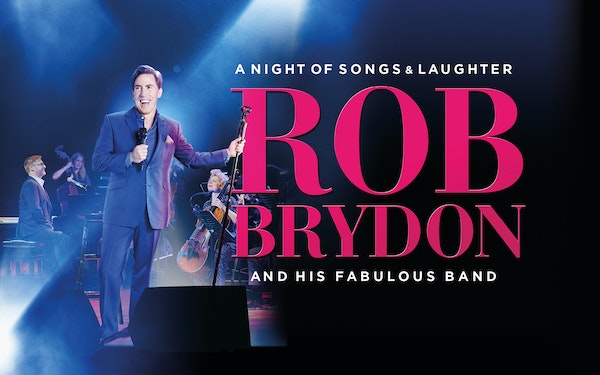 Rob Brydon - A Night of Songs and Laughter

Award winning comedian Rob Brydon and his eight–piece band will take to the road next year with his new show, Rob Brydon – A Night Of Songs & Laughter. The new dates mark the first time Brydon has created a show that includes songs and music as well as his acclaimed wit and comedy.

With songs from Tom Waits to Tom Jones, and Guys and Dolls to Elvis (and almost everything in between), audiences can expect Rob’s usual warmth and humour as well as some of his famed gallery of voices.

This Swansea-born radio and TV presenter got his big break in 2001 with a series of short comedy monologues, 'Marion And Geoff', which were shown on BBC2. This was followed by further TV appearances as Keith Barret, presenter of a spoof chat show and, perhaps most notably, Bryn West in the sitcom 'Gavin & Stacey'. Rob's career began at Radio Wales at the age of 20 where he narrated many radio shows, adverts and animated films, as well as later appearing on television shows and films. His stand-up shows have been equally successful, with sold out shows around the UK. His film work includes The Huntsman: Winter’s War, Cinderella and Lock, Stock and Two Smoking Barrels. In 2017 in London's West End he starred opposite Sir Kenneth Branagh in The Painkiller. His other theatre credits include Future Conditional at The Old Vic and A Chorus of Disapproval at The Harold Pinter Theatre.