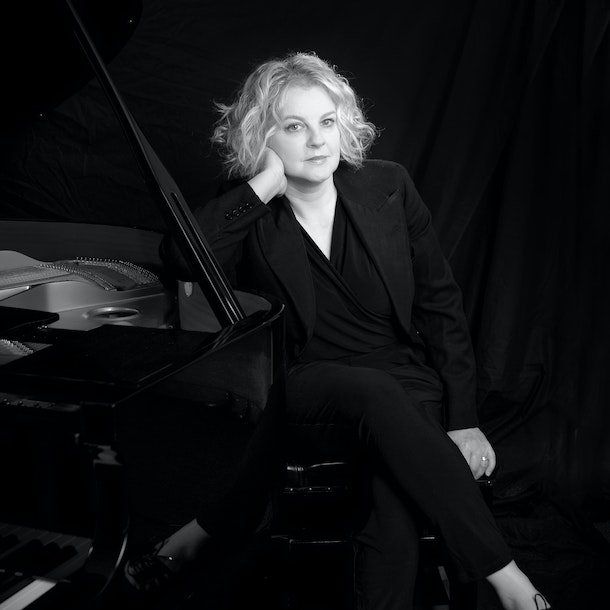 at The Cinnamon Club, Altrincham
Passed

“A bright and auspicious debut. She swings, is confident and has an engaging delivery. What’s not to like?” John Martin, Jazz Rag

"This first recording could just mark the beginning of much deserved recognition." Alan Barnes

The idea of a show featuring the work of pianist singers such as Nina Simone, Eliane Elias, Diana Krall, Blossom Dearie came from the meeting of minds of the band members; but who could produce such a performance?

There are few pianists in jazz today that can step up to the mark of singing whilst playing and rather than simply accompanying themselves, can exhibit superb technical and harmonic ability at the piano. Wendy is that pianist singer.

Joined by the superb guitar talents of Pat Sprakes who was asked by Darius Brubeck to join his band on tour in Nottingham; Paul Jefferies who is a founder member of Gypsy Fire and Ben Holder Quartet; Stevie Smith who is a consummate professional drummer who has drummed with Blur on their iconic 90s tours. Amongst them they have performed with jazz luminaries including Jim Mullen, Bobby Shew, Dave O' Higgins, Jean Toussaint, Bruce Adams, Alan Barnes, The Matthew Herbert Big Band, Tony Kofi, Nigel Price, Phil Robson.

The album has enjoyed overwhelmingly positive feedback from national media...
...Including

• Airplay on Helen Mayhew’s JazzFM show on 29th March 2018
• Airplay on Clare Teal’s BBC Radio 2 show on 7th Jan 2018
• A slot at Pizza Express in London on 25th November 2017
• Album of the week April and December 2017 on The Jazz UK radio plus ongoing weekly airplay
• Airplay (continuing) on 50+ worldwide stations including BBC, US and Canadian stations
• Reviews in The Observer (4 stars), Independent, Jazzwise magazine, Jazz Journal - incoming
• A UK/EU distribution deal from Discovery Records. They have placed Piano Divas in Ray’s Jazz in London, Amazon.co.uk and HMV amongst others.

Paul Jefferies is an accomplished bassist and teacher based in Oxfordshire, England. He is bassist with the Rob Terry Trio, The Ben Holder Quartet, Gypsy Fire and his own trio ‘Tantrum’ featuring Tommaso Starace. Paul teaches students of all levels from beginner to very accomplished (and even well known) performers. Paul was one of the founders of the successful Oxford Jazz Festival, he currently operates ‘Jazz-on-Tap’, Moreton-in-Marsh and Witney jazz clubs and has made a name for himself as an active and successful promoter of music and musicians.