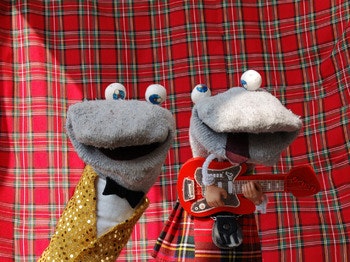 The Scottish Falsetto Sock Puppet Theatre are the comedy double act that has to be seen to be believed. Absolutely stupidly hilarious!

Taking on anything from James Bond to Star Wars, these guys bring you a brand new show full of songs, sketches, socks and violence.

The stars of BBC 3's Comedy Shuffle and Upstaged, and MTV's Best Show Ever, and the darlings of YouTube bring you songs, sketches, socks and violence. Including an entire Shakespeare play in its entirety (slightly abridged)!

'Had every single audience member... laughing until they cried' (Edinburgh Evening News, Aug 2012)

'One of the truly great comic inventions of our time' (Theatre Bath).