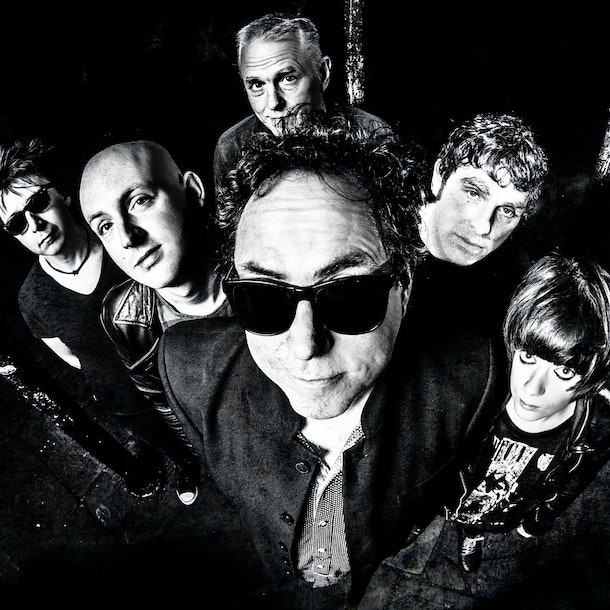 The Blue Aeroplanes' unique amalgam of rock, folk, poetry, punk, dance and art has been an acknowledged influence on a wide range of bands including REM and Radiohead. Combining pop smarts with serious weirdness, they have released almost thirty albums on various labels, several of which have charted in the UK Top 40 and the US Alternative Top 10. Their 1990 album 'Swagger' was Rock Album Of The Year in many publications including The Sunday Times. Ex-members have gone on to play with Massive Attack, Suede, Placebo, Goldfrapp and Primal Scream, while for many years they shared multi-instrumentalist Ian Kearey with folk legends the Oyster Band. They remain the only group to have been banned from The Rainbow Lounge, Lemmy's favourite hangout, and been invited to play at the Hay-On-Wye Literary Festival.

Now comes the release of the band's twelfth studio album, ‘Welcome, Stranger!’, recorded by the longest-lasting Aeroplanes line up to date. Original members Gerard Langley (poet/singer), and John Langley (drummer), sometimes with Wojtek Dmochowski (dancer), are joined by Gerard Starkie, formerly the main man of Witness and an Aeroplane since 2006, Chris Sharp (bassist and owner of The Fleece venue in Bristol), a band member since 2008, and the more recent additions Bec Jevons (guitarist and front-person of I Destroy) and guitarist Mike Youe. John and Mike also play with Bristol punk legend (and ex-Aeroplane) Rita Lynch, while Gerard is also Head Of Songwriting at BIMM Bristol, where he was responsible for guiding the early steps of George Ezra, among others.

Follow The Blue Aeroplanes on Ents24 to receive updates on any new tour dates the moment they are announced...

Here are the most recent UK tour dates we had listed for The Blue Aeroplanes. Were you there?