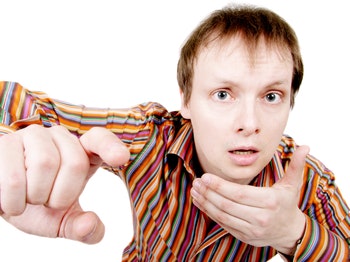 Human amphetamine of a comic from Brighton. Compere at the Krater Comedy Club. Grant possesses an energy and intellect which, when combined, make for dynamite comedy. His speed and dynamism create a magical energy which has audiences rapt and hanging on his every word.

'Stephen Grant is nothing if not original. Supremely intelligent yet utterly accessible, his charm lies in the quick-fire speed of his mind' (The Stage)

'An unstoppable, ebullient motormouth... He's famously pedantic, relentlessly logical and with the kind of comedy vision that can see round corners... you're never more than 15 seconds away from a really good laugh' (Chortle)

'It is not hard to see why Stephen is so popular, he possesses an energy and intellect which, when combined, make for dynamite comedy' (The Comedy Box, Bristol).

Follow Stephen Grant on Ents24 to receive updates on any new tour dates the moment they are announced...

Here are the most recent UK tour dates we had listed for Stephen Grant. Were you there?