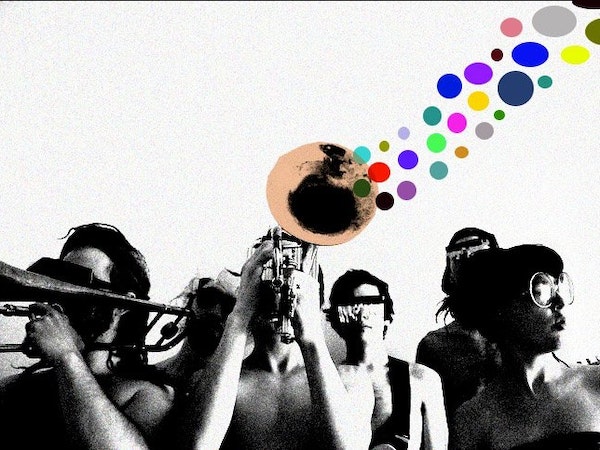 Rubblebucket sounds like a kaleidoscope looks — a continually changing pattern of ebullient drum beats, harmonies and horn exclamations, led by the buoyant vocals and saxophone of Kalmia Traver and the hyperkinetic energy of trumpet player Alex Toth.

The Brooklyn based, musical couple formed Rubblebucket in 2007 after finding like-minded players at an art opening in a defunct milk bottling plant in Burlington, VT. Discontent with playing the typical accompanying roles so often assumed by horn players, the two built an eight-piece band with a vision to create pop-friendly music that embraces skill, complexity and atypical arrangements.

Of their sound, Kalmia says, “We’re children of this noisy age, with access to so much music from across time and space. We soak up all the sounds… what comes out can be un-predictable, but it will be uniquely ours.”

Their inherently frenetic, communal performances are equal parts aural and visual. With often as many as ten people on stage including the usual guitar, bass, drums and keys plus trombone, trumpet, euphonium, sax, percussion and more, there is never a dull moment. The couple’s counterbalancing dynamic plays a big role. Kalmia rotates between hypnotic vocals and baritone sax while Alex indefatigably bounces from harmonies to a thundering floor tom to trumpet, which he often jumps into the crowd to play.

Follow Rubblebucket on Ents24 to receive updates on any new tour dates the moment they are announced...