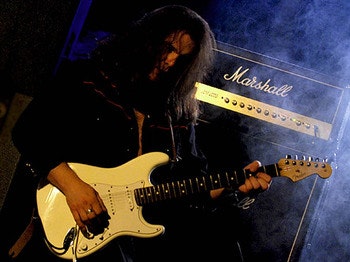 Rainbow Rising are a Northern / Midlands based band and reign as the UK's No1 tribute to Ritchie Blackmore's Rainbow. The band perform live all the classic Rainbow tracks and more besides, drawing from the entire Rainbow back catalogue and featuring the material produced by every legendary line-up of the band. Their two-hour plus show includes Kill the King, Still I'm Sad, Stargazer, Gates of Babylon, Catch The Rainbow, Since You've Been Gone, Long Live Rock 'N' Roll and many more as well as a number of Deep Purple classics too.

Rainbow Rising were formed in 1998, the aim was to not only recreate the unique Rainbow sound but to also capture the visual spectacle that was Rainbow live on stage. The band is made-up of a group of musicians who possess not only immense musical talent, but also an almost fanatical interest in the phenomenon that was Ritchie Blackmore's Rainbow.

The sheer attention to detail given to the act of recreating the live Rainbow experience is evident in every aspect of the band's performances. From guitar smashing, to stunning vocals, thunderous percussion and bass to dazzling keyboards and of course unmistakable Blackmore guitar work.