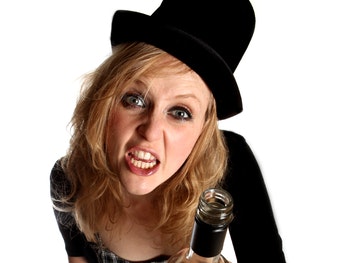 British comedienne and one of the founding members of the touring improv team behind Showstopper! The Improvised Musical, Pippa first emerged on the comedy scene with an incredibly successful Edinburgh Fringe Festival where her debut solo

show, Pippa Evans And Other Lonely People, was nominated for the if.comedy Best Newcomer Award 2008.

In 2009 she unleashed her alter-ego, psychotic American country and western singer Loretta Maine.

'Truly impressive one-liners...inspired, quotable pearls of wisdom. Fine comic writing underpins her flawless, perfectly timed performance. She’s a relative newcomer, but has certainly got the talent for a sustained and stellar career in comedy' (Chortle).

'... probably one of the most talented performers at Edinburgh this year' (The Independent, 2009).