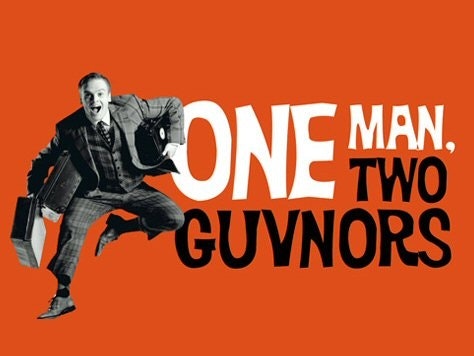 Fired from his skiffle band, Francis Henshall becomes minder to Roscoe Crabbe, a small time East End hood, now in Brighton to collect £6,000 from his fiancee's dad. But Roscoe is really his sister Rachel posing as her own dead brother, who's been killed by her boyfriend Stanley Stubbers.

Holed up at The Cricketers' Arms, the permanently ravenous Francis spots the chance of an extra meal ticket and takes a second job with one Stanley Stubbers, who is hiding from the police and waiting to be re-united with Rachel.

To prevent discovery, Francis must keep his two guvnors apart.

'One Man, Two Guvnors, one massive hit' (The Independent)

'A proper old fashioned giggle... The funniest show on the planet' (Daily Mail)

'Comic perfection. What are you waiting for? book now!' (The Daily Telegraph).

Follow One Man Two Guvnors on Ents24 to receive updates on any new tour dates the moment they are announced...

Here are the most recent UK tour dates we had listed for One Man Two Guvnors. Were you there?