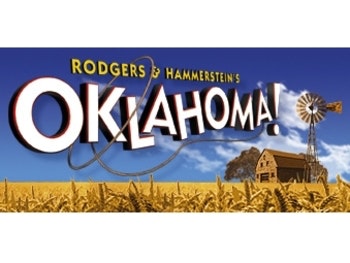 With music by Richard Rodgers and book and lyrics by Oscar Hammerstein II, Oklahoma was based on the Lynn Riggs play Green Grow The Lilacs and was the first musical written by the duo. It was originally produced on Broadway in 1943 and the Academy Award-winning film was released in 1955.

Set in the Oklahoma territory in the early 1900s, the musical tells the story of two sets of star-crossed lovers. Cowboy Curly loves Laurey, Aunt Eller's niece, but Curly's rival is the mysterious and dangerous hired hand Jud Fry. Meanwhile, Ado Annie is torn between cowboy Will and peddler Ali Hakim.

Their stories are told with the help of some of the best loved songs in musical theatre history, including Oh, What A Beautiful Mornin', I'm Just A Girl Who Can't Say No, People WIll Say We're In Love and, of course, the classic title song.

Directed by Rachel Kavanaugh and choreographed by Drew McOnie.

Follow Oklahoma on Ents24 to receive updates on any new tour dates the moment they are announced...

Here are the most recent UK tour dates we had listed for Oklahoma. Were you there?