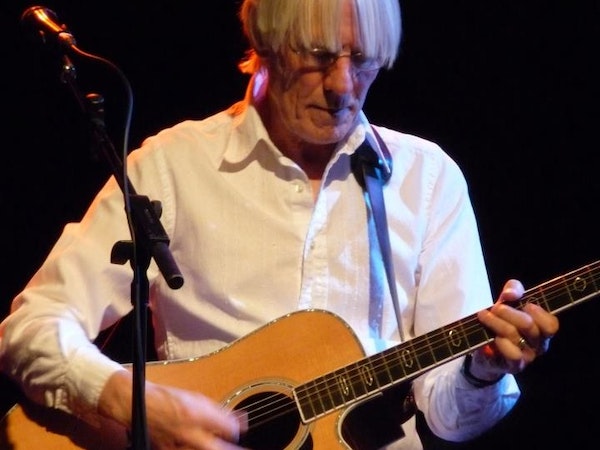 Hilton was born Hilton Stewart Paterson Valentine on May 21, 1943 in North Shields, Northumberland England (Counties were redistricted in later years and now North Shields is part of Tyne & Wear). As with many young lads in 50's Britain, the skiffle craze hit him hard and so his mum bought him his first guitar in 1956 at the age of 13. He immediately taught himself some chords from a book called Teach Yourself a Thousand Chords and formed his own skiffle band called The Heppers. They played locally in halls and at outdoor venues, with the newspaper calling them "a young but promising skiffle group."

The Heppers eventually evolved into the rock and roll band, The Wildcats which after some personnel changes, had Tappy Wright on rhythm guitar. Tappy was Hilton's best friend and became the road manager for The Animals. The Wildcats were a very popular band in the Tyne & Wear area getting continuous work in Church Halls, Working Men's ClHbs and Dance halls. They decided to take it to the next step and recorded a 10" acetate LP at Morton Sound titled Sounds of The Wild Cats. This makes the first and only pre-Animals record recorded by any of the original lineup. Hilton has no idea what happened to his copy, so if any of you fans out there can help him out it would be most appreciated!

In 1963 The Animals were starting to form. Chas Chandler heard about this wild guitar player from The Wildcats. Members of the Wildcats tell stories of Hilton ripping off his shirt and getting down on the ground wailing away on his guitar. Quite risqué in those days! Chas liked what he heard and asked him to join what was then called The Alan Price Combo. Sadly, the only evidence of this energetic guitar playing is the 1963 live Club - a-go-go recordings. These are the first recordings of The Animals before they signed with EMI. The sound quality of those recordings is less than desireable, but the energy is so intense you feel as if you are in the club yourself. Once the Animals got into the studio, the guitar took a back seat.

Hilton played with The Animals until their breakup in September 1966. In 1967 he was managing his former Wildcat band mate Keith Shields who recorded a few 45's for DECCA. One of those songs, Deep Inside Your Mind which was penned by Hilton can still be found on the CD British Psychedelic Trip Vol. 2 (Volume 3 of the LP series). You'll have to find a used copy of that as it is not listed on any of the online CD stores at the moment. In 1970 he recorded a solo album of what some people categorize as psychedelicized folk music titled All In Your Head. It is a record that he just as soon forget although he does admit to a couple of the songs being salvageable.

Hilton has reunited with the original lineup of Animals three times since their split. A one off benefit gig in Newcastle in 1968, in 1977 for the Before We Were So Rudely Interrupted LP and lastly 1983 for a studio LP ARK, a world tour and Greatest Hits Live LP also known as Rip It To Shreds.

In 1994, Hilton was inducted into the Rock & Roll Hall of Fame as a member of The Animals.

1994 Hilton started playing Animals music again and toured the world until June 2001. In May 2001, he was inducted into Hollywood's Rock Walk of Fame along with the other Animals and had a two night reunion concert at the El Rey Theatre.

Since 2004 Hilton has been concentrating on acoustic material, releasing a CD under the name Skiffledog titled It's Folk 'n' Skiffle, Mate!. He also spent some time touring continuously with original Animals singer Eric Burdon from Feb '07 - Dec '08.

2011 - Hilton released a new CD titled Skiffledog on Coburg ST. Besides some original compositions, the majority of tracks on this CD are Skiffle and early Rock & Roll songs that inspired him to learn the guitar at age 13. As a boy, he played many of these songs at local events with his first Skiffle band The Heppers. Later in the year he collaborated with Big Boy Pete (from Peter Jay & The Jay Walkers and "Cold Turkey" fame) on a Skiffle Christmas CD titled Merry Skifflemas.

Hilton Valentine tour dates listed on Ents24.com since May 2017.

Follow Hilton Valentine on Ents24 to receive updates on any new tour dates the moment they are announced...

Here are the most recent UK tour dates we had listed for Hilton Valentine. Were you there?