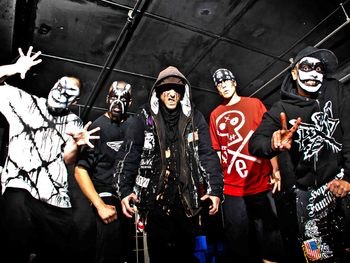 (Hed) PE is a nu-metal quintet from Huntington Beach, California. They fuse punk energy with hip hop lyrics and instrumentation to form a sound they call 'G-punk'. The rap metal act deliver a sensory assault of pumped up aggro-laden rock packed with gutteral emotion and unadulterated rage.

Originally based in Huntington Beach, CA, the band was founded in 1994 by frontman Jahred, whose goal was to fuse the region's long-standing punk rock heritage with G-funk-inflected hip-hop. He was shortly joined by bassist Mark who has remained alongside the band until present day. The line up is currently rounded out by guitarist Jaxon and drummer Trauma.