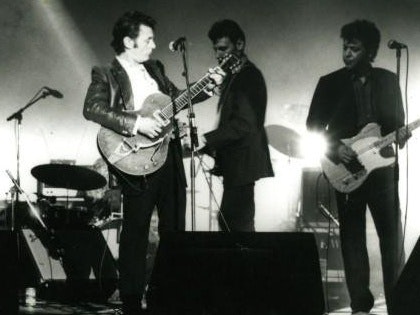 Throughout his career, Daniel Jeanrenaud has shared a bill, and hung out with the likes of; Jerry Lee Lewis, Johnny Cash, Carl Perkins, Bo Diddley and more with his first band to break into the industry 'The Kingsnakes' - which he formed with several members of American cult punk band 'The Flamin Groovies.' Chuck Berry even named Daniel's favourite Gibson guitar 'Nadine' after borrowing it on tour at Bill Grahams 'Old Waldorf' in down town San Francisco. The Kingsnakes parted ways in the mid nineties, playing their last show at the Olympia in Paris with 'Screamin' Jay Hawkins'.

Since then Daniel has been the man behind a legendary 12 year residency at the Marathon in Camden Town attracting the likes of; Paul Weller, Jarvis Cocker, Liam & Noel Gallagher, and Amy Winehouse to the crowds. Daniel also regularly jammed at the restaurant with Chas Smash of Madness, and even performed a few songs with Tina Weymouth of the Talking Heads, and with Jack White of the White Stripes, which was covered by Kerrang! and NME Magazine in 2002

Daniel Jeanrenaud is now signed to IHT Records, the label founded by British singer David Gray, who he recently supported at the Roundhouse. Besides this Daniel has also opened up for the Fratelli's at Somerset House, the Pretty Things, and Seasick Steve at the Blues Kitchen, and even played a private bash at the Houses of Parliament with his new project 'Daniel Jeanrenaud & the Camden Cats'.

Follow Daniel Jeanrenaud & The Camden Cats on Ents24 to receive updates on any new tour dates the moment they are announced...

Here are the most recent UK tour dates we had listed for Daniel Jeanrenaud & The Camden Cats. Were you there?