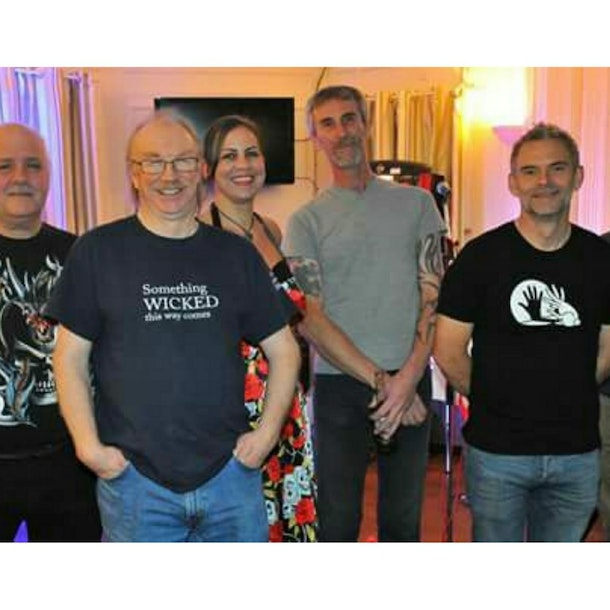 We rehearse in Crawley, West Sussex and play mostly covers but have a few originals. Generally it's classic rock with some blues mixed in and a couple of soul classics.

Borrowed Time was originally formed by Martin (Fez) & Paul in 2009.

Our current line up is:

The band has built a sizable roster of songs with a bias toward Classic Rock, Blues and Rock n' Roll.

We are actively looking for gigs large and small for any occasion.

A bit about the members:-

I grew up in the late '70s/early '80s, so in the maelstrom of post-punk and new romanticism. I first started DJ'ing and spent every hour possible listening to just about anything I could lay my ears on. I started out as a bass player in my first bands until I was in the Torquay-based originals band, The Gypsy Dogs, where I switched from bass to lead singer. The late '90s saw me in the goth scene bands All Living Fear and Corrosion before moving to Crawley, meeting Martin and forming Borrowed Time. My influences are wide and varied but I love the energy of punk, the groove of good old-fashioned soul and the punch of rock 'n' roll. Examples: The Stranglers, Wilson Pickett, The Cult, Aretha Franklin, The Clash, Genesis, The Jam, Duran Duran, David Bowie etc.

It has to be remembered that I first started playing in the early 60's, well before all the heavy rock started. My influences back then were of the ilk of Howlin' Wolf/Hubert Sumlin, and the original Butterfield Blues Band with Mike Bloomfield and Elvin Bishop, just to name a few. I then gave up the guitar around early 70's, not returning to the devil's instrument till early 90's. I am inspired by any player who plays blues subtly and with a jazz-tinged flavour. (Last sentence plus Wolf/Sumlin and Mike Bloomfield probably sums it up succinctly).

I was in my early teens in the early 70's so Glam rock was the big thing , Slade, Trex, The sweet etc. But Slade had covers of Ten Years After, Janis Joplin & Steppenwolf on their albums so I looked for their records and from then on things got a bit more serious. So yes the usual suspects are all in my record collection: Black Sabbath, Led Zeppelin, Pink Floyd, Deep Purple. I also discovered Johnny Winter and thereby the blues. Prog and Psychedelic rock also loom large for me Van Der Graaf Generator being top of the heap but also Gong (Steve Hillage) were a big influence More recently IQ, Joanne Shaw Taylor & Chantel Mcgregor

I started a little late for public singing but it's one mid life crisis I am very grateful I pursued. I started singing with the lovely Songbirds female choir in 2010 and also joined Rock Choir. Through Rock Choir I joined a Horsham band as vocalist and met an amazing sax player who inspired me to buy and learn to play sax at the tender age of 43. Through Songbirds I met the wonderful Nikki Franklin and joined her brand new choir, Shout Chorus in 2013. I joined Borrowed Time in February 2016 as vocalist and percussionist with a bit of sax thrown in. Through the Choirs and band I have performed in care homes, charity functions, weddings, at The Hawth, Hyde ParK, the 02 and toured the Isle of Wight. Musical influences include Madness and anything ska and, well, anything with lyrics and a tune really!

Follow Borrowed Time on Ents24 to receive updates on any new tour dates the moment they are announced...