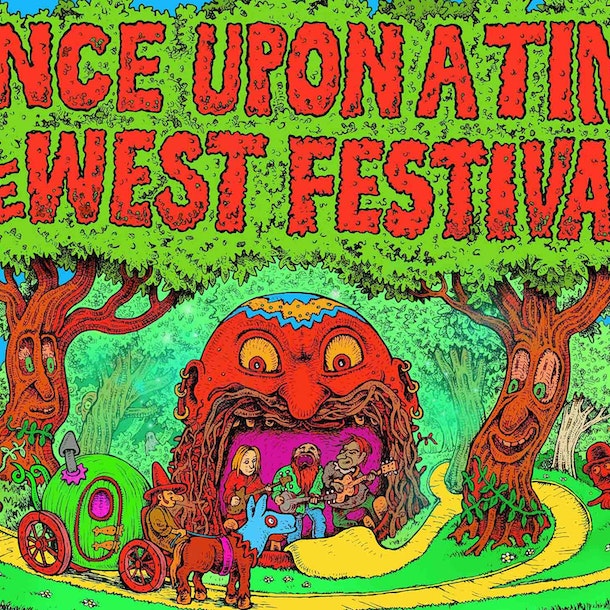 Once Upon a Time in the West Festival

A collection of rogues and misfits surfing a tidal wave of horns, fiddles and guitars! Rapidly exploding from the Balkan Brass genre they emerge as an anarchic orchestra of passion and originality. So enter the big top and be immersed in the winding world of the hurdy-gurdy, the sonorous land of the tuba and the exotic realm of the duduk. Be ready to be engulfed by a wall of mesmerising virtuosity and a whirlwind of frenzied dancing. You may enter unknowingly but you will leave spellbound!

Weirdos of the West country! Hold up yer cider jar, grab thee badger and hitch a ride on that Skimmity wagon! You’ll be taken on the ride of your life along the back roads and byways of the South West – from fields to pubs, weddings to festivals and cider sheds to…..well, we don’t be leavin’ no cider shed! So, if you be lookin’ for proper job, cider swilling Scrumpy & Western music with humorous lyrics, a bit of saucy banter, a lot of p*ss-taking and a dancing badger, then we be the boys guaranteed to get your shindig shaking! Check out the skimmityhitchers.com/wordpress/ for further tour dates and to discover more about the West Country’s favourite reprobates.

Led by the darkly charismatic, Norwegian-born Paul-Ronney Angel, The Urban Voodoo Machine is a supremely talented collective of London-based musicians who have been bringing the spirit of the carnie to an ever-growing audience of dedicated fans these past few years. Sounding like they should be from the Deep South, the band are self-styled purveyors of 'Bourbon-soaked Gypsy Blues Bop 'n' stroll'.

An incredible band with a very theatrical take on delta stomping blues and lyric-driven dirt-swing.

An 8 piece ska band with the vitality and instant feel good of the specials, creating a festival vibe wherever they play. Previously supported Zion Train and Zen Hussies, and played at Ashton Court Festival.

The Boot Hill All Stars describe themselves as 'West Country bootlegged hoedown'. When the thumbscrews are applied, they are forced to admit being more of a psychobilly-bluegrass-ska band, playing banjo and guitar driven songs to 'grab your partners by the gland'. They have supported The Wurzels in the past, although most West Country bands have to be honest; far more impressive is that they often share the stage with the likes of the Surfin' Turnips.

Armed with a guitar, a banjo, a part-time assortment of bluesy and folky musical collaborators and a little box to stomp on, Dana Immanuel's peculiar brand of honey-voiced North London based Americana and pseudo-folk could be bottled and sold as moonshine. With influences from Alice Cooper to Ani Difranco via Hank Williams and the local dope peddler, her live show is not to be missed.

Two guitars, two voices and a heap of old songs - some folk, some not.

Funke And The Two Tone Baby

Kent-based mechanical alt-blues band 'Funke & the Two Tone Baby' is the pseudonym of multi-instrumentalist Dan Turnbull. Described as creating ‘new, exciting and innovative music’ (R2 Magazine), in two years Funke has gone from pub gigs in Margate to performing 300+ shows and festivals across the UK and Europe. Combining effects pedals, beatboxing and grooving bass lines with traditional instrumentation, powerful vocals and relentless energy that provides tracks with a ‘distinctive and contemporary twist’ and gets people ‘grooving like an apoplectic orang-utan’ (Sound of Confusion).

Mr Tea and the Minions

United by a love of tea, energetic dancing, cheeky riffs, silly hats, and cake, Mr Tea and the Minions have been unleashing their colourful explosion of musical mayhem on unsuspecting audiences since 2013. Their raucous Ska Folk blended with full-fat Balkan beats and a squeeze of tangy Dub has made them party-starting festival favourites – and has inspired frenzied dancing all over the UK (and on a number of forays into continental Europe), with almost 100 festival appearances including Glastonbury, Boomtown, WOMAD, Secret Garden Party, Shambala, Belladrum, Wilderness, Nozstock, and Goulash Disko, to name just a few. Their highly anticipated new album ‘Mutiny’ is set for release in October 4th 2019 and it’s sure to catapult the band to new heights with it’s mix of high energy, melodic and exciting original songs that the band are extremely excited about unleashing on the world!

Dubclass are a 6 piece psychedelic Dub / Reggae outfit from Devon Influenced by the psychedelic sounds of yesterdecades, the jammers developed their own signature sound. With a range of musical backgrounds Dubclass's ingredients are very individual. Such diversity and with influences of many genres it is clear Dubclass's signature sounds will never be immediately pigeonholed; dub, progressive rock, earthy, punky, ska, trance, rock, and funky moments....you decide what we are - we sure as hell don't know!

"A chirpy force for good and a great party starter that deserve to be booked all over town" -Venue Magazine. All things Ska/Punk/Two Tone with a bit o' brass and girl vocals. They've got everything from the Slits to the Specials.

We are Poor Old Dogs and we play folk music to stomp to. We formed with a collective inclination for good, honest music. We reside in the nooks and crannies of Bristol with a desire to sow our wild musical oats far and wide. We play songs about everyday fishmongers, questionable milkmen, tight-fisted estate agents and general weirdos amongst other subjects; all folk songs at heart. We play like madmen and we sweat a lot.

The Severed Limb are a young six-piece band from London who play roots influenced music for a contemporary audience. Their skiffle-style line up includes washboard, guitars, double bass, drums and accordion. A quiff-shaking mix of washboards, tea chest bass, box drums and harmonicas.

The Sneak Eazies are a ska band from Bristol.

Nick is a Folk-ish songwriter joined by one half of the band Flipron.

Malarchy rip the wedding band rulebook to shreds, bringing Klezmer, Romani, Balkan, and Jazz styles to a never-ending celebration. This passionate, intricate, fast, and extremely danceable world quintet tear through the musical traditions of Europe as if it were the last night on Earth. Welcome to the party! Formed in 2000, Malarchy have become known as one of the South West's top European roots acts.

A merry boat band from the Kennet and Avon Canal. They bring tunes of wonderment and woe, from dark twisted folk tales, to circus tomfoolery, to general piratesque rowdiness. Your feet will fly to their galloping gypsy rythmes and harmonious vocals. Unleash your inner bucanneer!

Immigrant Swing peddle an eclectic bunch of sounds, nationalities and styles– mashing up the rhythms of Jazz Manouche, the brass sounds of the Balkans and Hip-hop orientated vocals. If their music doesn’t make you want to dance, you’re probably not human.