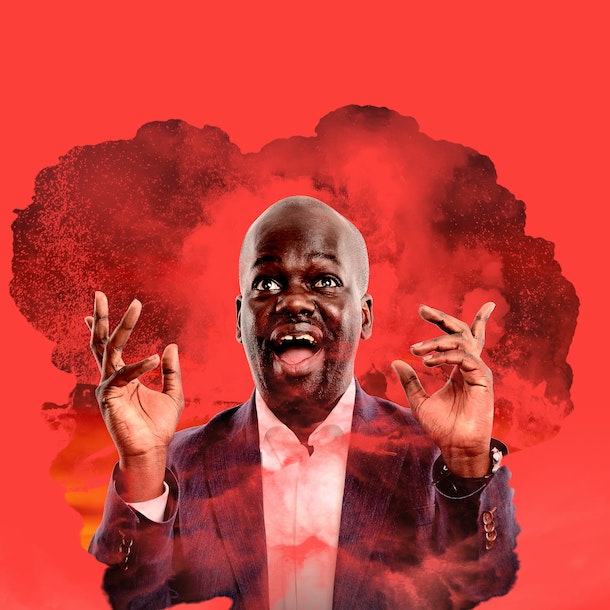 Finalist of Britain’s Got Talent, star of BBC Radio 4’s Citizen of Nowhere and part of the 2020 Royal Variety Performance, Daliso Chaponda is back out of the house and on a stage with a new hour of the slickest, sharpest look at life.

It’s fair to say that 2020 hasn’t been going to plan for Daliso… but he’s been performing online daily to millions of viewers, this is your first chance to see what this master of satire has been cooking up!

“Full of sharp one-liners and well-crafted gags...a real talent” - Metro
“He is hot property” - Evening Standard
“An expert entertainer. Gets laughs from topics other comedians shun” - The Guardian

This show was rescheduled from 27th February 2021.

Daliso is a versatile African comedian equally comfortable talking politics, romance, filth or religion. As such, he has performed in such diverse venues as churches, casinos, strip clubs and sports bars and was a finalist on Britain's Got Talent 2017. He has lived in countries where the press is not allowed to criticize the government, and in others with no libel laws where they can say anything. He has been both a journalist and a jaded newsreader. Daliso has appeared at many festivals that have included Melbourne, Edinburgh, Singapore and Cape Town Festivals. He is also a prolific fiction writer and has had his science fiction, murder mysteries and fantasy fiction published in numerous magazines and anthologies. He also co-wrote a play that aired on BBC Radio 4. 'Full of extravagant gestures and impassioned speeches. He inspires whoops and cheers from his watchers. Highly recommended' (BBC) 'A joy to listen to. Provocative, poignant and ultimately hilarious' (The Guardian) 'I laughed so much I thought I'd pass out!' (The List) 'It takes a special kind of act to work on both sides of the Atlantic (as well as across Africa), but it seems an easy transition as he compels the crowd with his racial and socially insightful comedy' (News and Star, Carlisle) 'Absolutely [took] the roof off the place. Brilliant, brilliant act' (The Frog and Bucket). Daliso Chaponda was #9 in Ents24's Hardest Working Comedians of 2018 list.