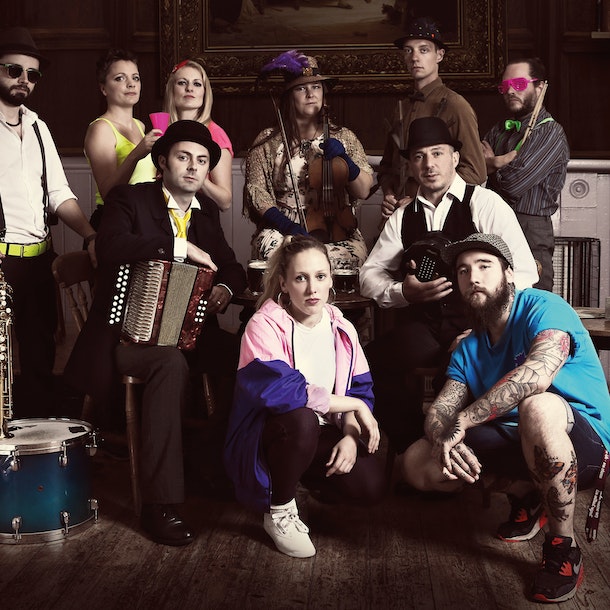 The Demon Barbers are a seven-piece folk-funk-fusion band, combining solid traditional acoustic instruments and songs with the added oomph of a superbly tight rhythm section, making a unique and captivating sound.

Since winning ‘Best Live Act’ at the BBC Radio 2 Folk Awards The Demon Barbers have been immersed in the development of their Folk & Hip Hop Dance Extravaganza ‘The Lock In’. Following a number of successful UK tours, including high profile shows at Glastonbury Festival and 5 star reviews for their 2 week run at Edinburgh Fringe, The Demon Barbers now bring some of the UK’s most exciting young Clog, Sword, Hip Hop & Break dancers onto the concert stage to create the live folk music & dance spectacular of the year!

The Demon Barbers XL features new material from their new album ‘Disco At The Tavern’ a collaboration with Grammy & Emmy Award winners Donal Hodgson and Kipper, best known for their work with Sting.

“It’s as if they’ve found the key to unlock the idea of 21st Century folk-rock revealing that these days rock isn’t part of the equation at all. They’re giving folk music its own dance revolution. The music here isn’t the background, it’s the manifesto. And it’s wonderful” Chris Nickson, f’Roots