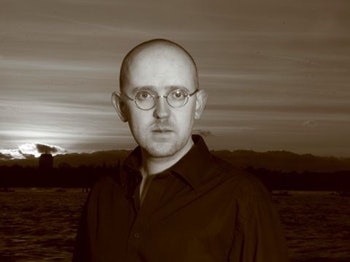 Headiner: Paul ‘Silky’ White is a comedian and musician from Liverpool. Since 1994 he has avoided adulthood, wealth and financial security by doing something he loves instead.

TV Appearances Include The Stand-Up Show (BBC), The World Stands Up (Paramount) and the Comics Lounge (AUS).

Festival Appearances Include Glastonbury, Bestival, Camp Bestival, The Big Chill, Green Man, God’s Kitchen Global Gathering, Kendal Calling, Comedy Festivals including Edinburgh Fringe, Glasgow, Leicester, Melbourne and the world’s smallest comedy festival in Frampton Mansell, which is a real place, and not a character in Downton Abbey. He’s been reported dead to the police, played in the house band at the Kilkenny Festival in Ireland, and been Dr Who’s backing guitarist.

50p at the Box Office
£1.00 over the phone or on internet bookings.
Line up is subject to change - hey, if you got offered a TV job you wouldn't be here either.
Suggested age guidance 16 plus

Runner up for just about every award going, including BBC New Comedy Award, and organiser of Kill For A Seat comedy nights. 'Supremely talented musical comedian’ (www.BroadwayBaby.com) 'Rarely on TV, occasionally on radio. The title is unrelated. It just made me laugh' (Three Weeks) 'Your funny best friend, only funnier’ (The Herald) 'Honest, heartfelt, slickly delivered, irresistible and, yes, occasionally disturbing stand-up...Relatable, warm and crucially very funny' List 'Equally at home as a compere or main act, Silky has consistently proved himself one of the best and most reliable performers around. Highly recommended' (Leeds Guide) 'Considered and clever: excellent timing and dry delivery revealed a comic at the top of his game' (352 Magazine Luxembourg) 'Always brilliant’ (Metro) '... a very, very funny fella... just brilliant' (John Bishop) '... Silky whose irresistible stage persona combines angriness with silliness. He has a mastery of the descriptive phrase and his mix of self-deprecating wit, music and gently quirky material brings audiences together in tears of laughter (Funhouse Comedy).

Graham Whistler started performing stand up comedy in June 2010. Graham, who is based in Bournemouth regularly gigs across across the south and midlands. After just over a year, he was performing his debut one hour solo show at the 2011 Edinburgh Fringe Festival (Stand-Up, Fall Down). He returned with the same show in 2012 which received a 4 star review in The Skinny. "Here is someone with genuine talent and a remarkable story to tell" - The Skinny