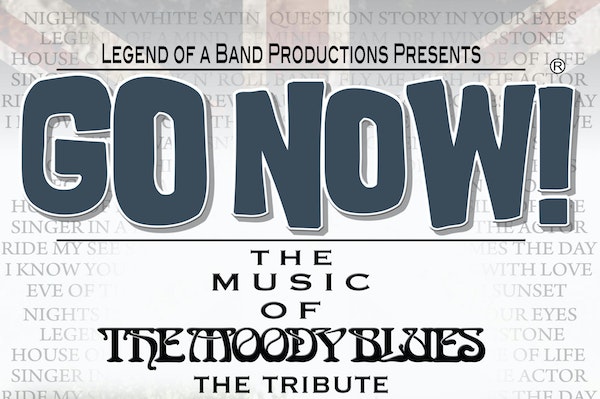 GO NOW! The Music Of The Moody Blues

This show has been rescheduled to 5th March 2022.

GO NOW! The Music Of The Moody Blues

GO NOW! The music of The Moody Blues is the brainchild of drummer Gordy Marshall. Gordy toured with The Moody Blues for 25 years as a session musician. Along with Mick Wilson (known from 10cc), the two musicians have brought together some of the very best singers and instrumentalists in the country to create the ultimate tribute to the greatest classic rock band of a generation. Hit songs such as Nights in White Satin, Tuesday Afternoon, Go Now and Isn't Life Strange are beautifully recreated live, and sound as close to the initial recordings as you will ever hear.

Author of 'Postcards From A Rock And Roll Tour', Gordy Marshall toured as the drummer for The Moody Blues for over two decades. He began writing about his travels with The Moody Blues in a blog which quickly became a book. Writing about this amazing job became an end to itself and the second edition will be ready... sometime soon. In addition, Gordy is the founder/creator of GO NOW! -The Music of The Moody Blues- The Tribute . Great musicianship, acute attention to detail and distinctive harmonies are synonymous with The Moody Blues. GO NOW! faithfully re-creates the essence of what makes The Moody Blues unforgettable. This 'super group' features Gordy Marshall (Kit - Known from The Moody Blues), Mick Wilson (Lead Vocals - Known from 10CC, Jeff Lynne), Tim Maple (Guitar - Leona Lewis, Westlife) Patrick Duffin (Keys, Guitar) and Nick Kendall (Guitar). These world-class musicians, singers and songwriters bring you a new exciting show celebrating some of the best Classic Rock of a generation. From timeless classics like Tuesday Afternoon, I Know You're Out There Somewhere, Legend of a Mind and the unforgettable Nights In White Satin, GO NOW! presents a tribute to the music of The Moody Blues.