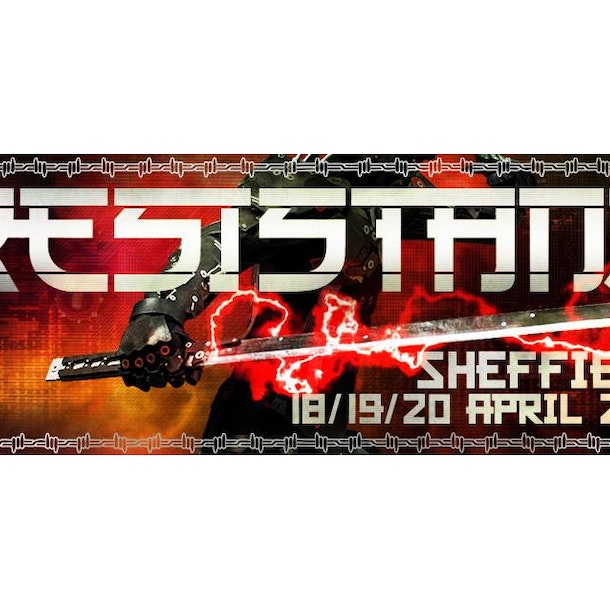 Resistanz continues to adhere to its core programming on its return in 2014 - the cream of international industrial and electro acts combined with the best of British.

Another wild weekend is guaranteed with some great bands, food court and market area plus much more.

Famed dark synth-poppers from Norway, formed in 1986 by Stephan Groth and Jon Erik, who subsequently left the group over creative disputes. In their 20 year career, the group have toured worldwide, winning German and Scandinavian awards for their music, the style of which has constantly progressed from a darkwave origin through electropop and currently runs in the vein of mainstream rock music more than ever before.

Founded by Tom Shear after hearing a DJ spinning industrial dance music at a Depeche Mode concert, A23 combine the electronic synth-pop sounds with the heavier, darker aggression punk represented.

2 guys from the Hardcore / Death metal scene in Italy who like to produce and mix whatever the hell they like: fat bass, rough synths, 8bit, electro, metal, hardcore, pig squeals… All mashed up with dark atmospheres to create their personal sound: Club Core.

CHROM were formed in May 2007 by Christian Marquis and Thomas Winters, after both discovered their mutual love for solid, club-compatible yet melodic Electro sounds. The group’s name is a combination of the two musician’s first names (CHRis and tOM.) CHROM stands for an effective synthesis of Synth Pop, EBM and Club-Electro, i.e.: massive beats and powerful bass with a harder edge, garnished with ultra-catchy melodies.

Industrial, EBM group formed in 2010. Influences include bands as diverse as NIN, Iron Maiden and Combichrist.

Freakangel is an Estonian electronic-industrial-rock band created in the very end of 2009.

God Module take all the common Electro, Gothic and Industrial clichés and systematically tear them apart.

Montreal Industrial noise with epic melodies, brutal electronic beats and songwriting with the deadly precision of a sniper rifle.

The Organ Donors, brothers Matt & Scott Harris, have over the past 10 years unquestionably established themselves as one of the leading forces in hard dance music. Their pioneering Dex & Fx stage shows have led them to become one of the most sort after big room acts in the business, gaining residencies at the worlds biggest stages, from Dance Valley, Frantic, Slinky, GodsKitchen, Goodgreef, Transaction, Dance Academy, Polysexual and Heat to name a few.

Formed back in 2002 and eager to create their very own gestalt of electronic music, Rotersand have occupied top rankings in the German Alternative Charts, the Nordic Alternative Charts and the Dutch Alternative Charts. Their special melange of 80’s Pop, Electro, Techno and even classical elements makes them a band to be reckoned with.

Incorporating hard beats, intricate and glitchy sequencing, soaring melodies, powerful choruses and any number of other musical ideas into the fold, The.invalid has developed from the bedroom project of producer Seamus Bradd, into a hard-electro monster entirely of its own design.

Belgium-based rhythmic noise/technoid project that has been described as ritual trance and tribal industrial in style. The music includes dark psytrance, tribal and ritualistic or ethnic elements, which have become especially pronounced in later works.