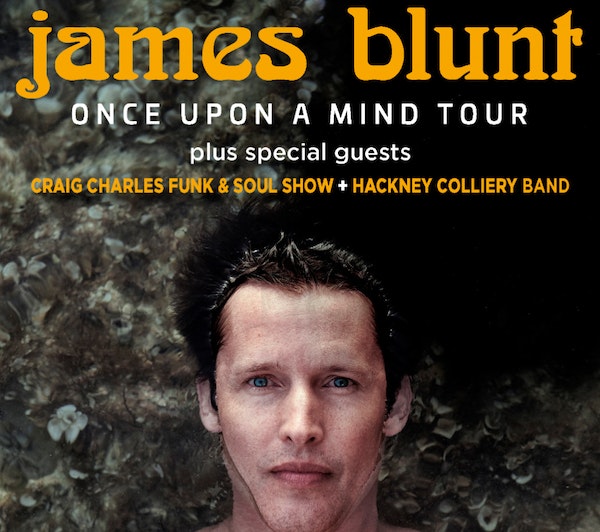 James Blunt will perform a very special outdoor show in the beautiful grounds of Audley End stately home in Saffron Walden, Essex on Friday, 13th August 2021! Joining him for this unique evening will be the legendary Craig Charles Funk & Soul Show and the amazing Hackney Colliery Band

Former British Army reconnaissance officer, Blunt took a dramatic career turn to become of the UK's most successful singer-songwriters of recent years. He is now also widely loved for his clever and witty tweets! His debut album, Back To Bedlam, sold over 11 million copies and hit single, You're Beautiful, was number one in multiple countries whilst winning an Ivor Novello for airplay and receiving three Grammy nominations. Blunt went on to achieve another multi-million selling album, All The Lost Souls, and continued his success story with Some Kind Of Trouble and Moon Landing.

A 9 piece brass, Funk, Hip-Hop marching-band, to rival The Young Blood Brass Band and blow your mind. East London’s Hackney Colliery Band are leading the charge in a groundswell of new groups reinventing the all-acoustic brass band for the 21st century. Mining musical nuggets from an array of genres, their setlist is as diverse as the London borough that gave them their name. Their highly acclaimed 2012 debut Common Decency received worldwide airplay including an almost full house at the BBC with plays across BBC Radio 1, 2, 3 and 6Music. Live, they’ve taken their unique collision of styles everywhere from Kosovo to the Closing Ceremony of the London 2012 Olympics where they performed to a global audience of 1 billion! Constantly striving to explore new musical horizons, the Hackney Colliery Band have yielded some truly special moments with collaborations with artists as diverse as Amy Winehouse, Eliza Doolittle, the Urban Voices Collective gospel choir, and hip hop band Lazy Habits.